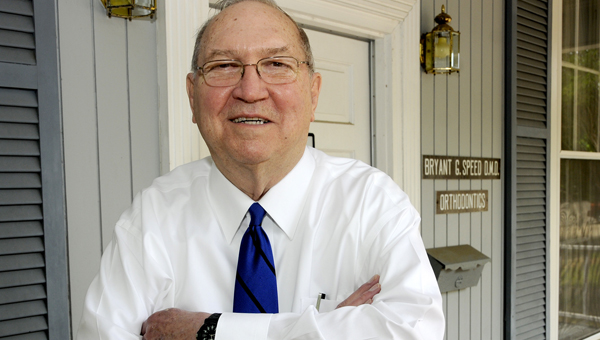 Dr. Bryant Speed dedicated more than four decades to correcting his patients’ teeth, but it was his kind-hearted ways that left everyone around him smiling.

Speed died Saturday at the age of 79, leaving those he deeply influenced with precious memories of his greatness and endless encouragement.

“He is irreplaceable,” said Dr. Brett Wood, who has known Speed since he was a 10-year-old patient of Speed’s. “He was better than everybody thought he was, even behind the scenes when nobody was looking. He was just a great, solid Christian man.”

From Mobile, Speed moved to Selma with his family in 1944.

After graduating from the University of Alabama School of Dentistry with honors in 1960, Speed joined the U.S. Public Health Service and completed his orthodontic training at Alabama.

Speed began his orthodontic practice in Selma in 1967 and retired in Selma in 2011, when Wood took over his practice.

Wood reflected on his times with Speed, which ultimately led him to becoming a practicing orthodontist.

Wood was one of Speed’s students at the University of Alabama at Birmingham’s School of Dentistry.

“He knew that was what God was calling me to, so he always made me a better person,” Wood said. “He became more like a grandfather, father-figure or mentor than just a teacher and practice partner.”

In 1969, Speed joined Elkdale Baptist Church. Over the years, he served as the chairperson of the deacon body, Sunday school teacher and a reverend of young married couples.

Elkdale’s pastor Cory Horton recalled the intimation he felt when he was hired as the youngest pastor at 28-years-old.

Horton said Speed gave him compliments, such as telling Horton he explained the sermon well, helped make decisions that really helped the church and was passionate about the church’s ministry.

“They were so specific that you knew he was taking the time to pay attention and encourage you,” Horton said. “That stood out to me personally, because he helped me get my feet wet in pastoring this church, encouraging me and pointing me the right way.”

Visitation will be at Elkdale Baptist Church Wednesday beginning at 9:30 a.m. The funeral service for Speed will be at  11 a.m., with Horton and Rev. Clayton Speed officiating. The service will be followed by the burial at New Live Oak Cemetery.

Acting Rabbi Steven Grossman stands Sunday outside of the Temple Mishkan Israel where he will conducting services meant to reflect... read more