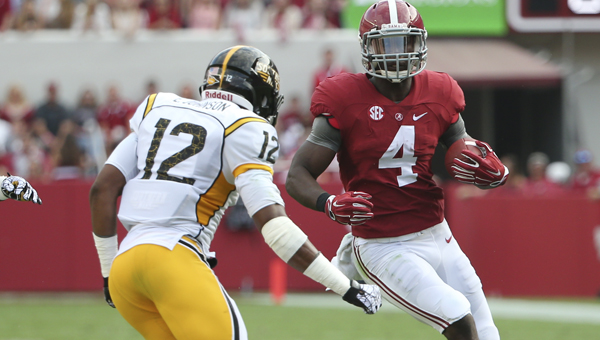 Alabama running back T.J. Yeldon looks to juke a defender for Southern Miss in Saturday’s game in Tuscaloosa. — Kent Gidley

TUSCALOOSA (AP) — Blake Sims passed, ran and confidently staked his claim as the leader of No. 3 Alabama’s offense.

Sims threw for two touchdowns and rushed for a third in three quarters and emerged as the Crimson Tide’s undisputed starting quarterback — for now, at least — in a 52-12 victory over Southern Miss on Saturday night.

“I didn’t feel real comfortable with the way the game was going, and it just didn’t feel right to make a change,” Alabama coach Nick Saban said. “Do we want to continue to play both quarterbacks and try to develop both guys? Absolutely.

“Jake (Coker) needs to play and he needs to develop confidence. I think we’re going to have to make a decision on a week-to-week basis on what gives us the best opportunity to win. Right now, Blake probably is a little more confident. If that remains that way, he’s probably going to start the game. He’s started every game so far.”

Sims was 12-of-17 passing for 168 yards for the Crimson Tide (3-0) ahead of the team’s Southeastern Conference opener against Florida. Coker didn’t come in until late in the third quarter against the Golden Eagles (1-2), who have lost 25 of their last 27 games.

“Everybody knows their time to step up because you get that feeling,” Sims said. “It doesn’t matter if you’re a freshman, sophomore, junior or senior, if you’ve got to step up, you step up at the time.”

Most of Sims’ completions went to the nation’s leading receiver, Amari Cooper. Cooper had eight catches for 135 yards and a touchdown to tie DJ Hall’s school record of five consecutive 100-yard games set in 2006.

Sims also ran five times for 46 yards, including a 4-yard touchdown. Coker did open by leading Alabama on a 99-yard scoring drive.

Panthers hold off late Monroe County rally to get back to .500

Southside (2-2) made it interesting at the end, but the Panthers held off a late Monroe County (1-3) rally Saturday... read more