The arsenal of non-lethal weapons available to the Selma Police Department got an infusion Tuesday, when the Selma City Council approved the purchase of an additional 26 stun guns.

This purchase will provide a Taser X26 to each of the department’s officers, and follows a similar order by the council of 26 stun guns in May. 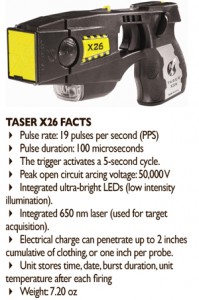 Selma Chief of Police William Riley said the addition of the stun guns to the department’s arsenal has already proved beneficial.

“Right now, I can think that we have used stun guns on about six occasions,” Riley said. “The more less than lethal options, the better.”

The expected cost of the 26 stun guns is expected to be $36,000 and will be funded by the city’s half-cent sales tax fund.

The addition of the stun guns had been part of Riley’s budgetary requests for the 2015 city budget, but was initially pulled out because of the need to cut 6 percent of his budget to help the city put together a balanced budget for next year.

But, Ward 4 Selma City Council member Angela Benjamin approached members of the council during Monday’s budget hearing and asked that the item, along with the budget request for new video body microphones for officers, be put back in the budget.

During Tuesday’s council meeting, Ward 1 Selma City Council member Cecil Williams asked the council go ahead and purchase the stun guns instead of putting them in next year’s budget.

Riley said those officers who currently carry stun guns were required to go through eight hours of training before being issued the stun guns. The training, Riley said, did include each officer being hit with the stun guns.

“We are going to contact the vendor tomorrow and let them know that we will have an order coming in for 26 Tasers,” Riley said. “That will give them a heads up and then we will get the training scheduled for those other officers.”

The push for the stun guns came earlier this year, following December’s officer-related shooting, where Ananias Shaw was shot and killed by an officer. Shaw reportedly approached the officer in a threatening manner while holding a hatchet.

The officer was cleared through an investigation by the Alabama Bureau of Investigation. A Dallas County grand jury also found the officer acted correctly.

The Selma City School Board approved its financial plans for the upcoming fiscal year. With a unanimous vote, the board... read more