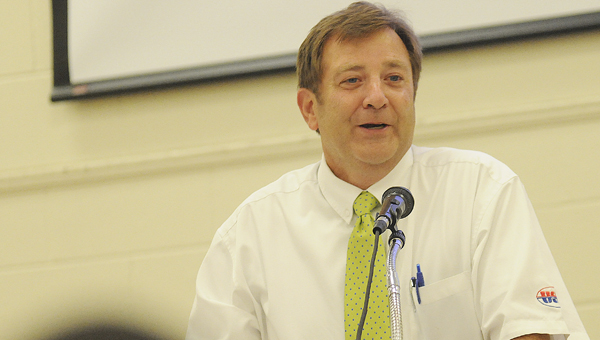 Football has changed a lot since Major Ogilvie was scoring touchdowns for the University of Alabama in the 1970’s and 1980’s. The game has gotten faster, with no huddle offenses dominating the sport, and for the first time ever a playoff will decide the 2014 national champion.

Ogilvie discussed all of those things and shared a few laughs with members of the Selma Quarterback Club Monday night at the Carl C. Morgan Convention Center.

Ogilvie said high-paced offenses are putting players on the field for more plays, which in turn results in them taking more hits.

In an age where concussions have become a hot topic, Ogilvie said he is interested to see if the NCAA makes a ruling that at least allows defenses more time to substitute, or some kind of rule that would slow offenses down.

Before he spoke about the state of today’s game, he looked back at his own career. Ogilvie played under Paul “Bear” Bryant and won three SEC championships and two national championships during his time with the Crimson Tide.

“I wouldn’t be up here tonight if it wasn’t for Coach Bryant,” Ogilvie said. “I’m very grateful I got to go to the University and play for him and get my education.”

Ogilvie told a story about how he was injured and in the hospital before a big game against LSU.

He said Bryant called him every day during the week to check his health and after going through a couple of practices and agreeing to play on special teams, he ended up starting at running back and playing every snap in the Crimson Tide’s 3-0 win.

“We had 67 offensive plays that night,” Ogilvie said with a laugh. “I participated in every one of them.”

Ogilvie said during his playing career, the cost of tickets to an Alabama game was between $6 and $8 and Bryant Denny Stadium, which now holds 101,821, held around 55,000 people.

Even though times have changed, Ogilvie is still getting recognition for his tremendous career. In 2014, he was inducted into the 2014 Alabama Sports Hall of Fame.

The meeting will start at 5:30 at the Carl C. Morgan Convention Center. For more information on the Selma Quarterback Club, call 412-1528.

A fishing tournament coming to Selma in late October will give high school students a chance to compete in a... read more