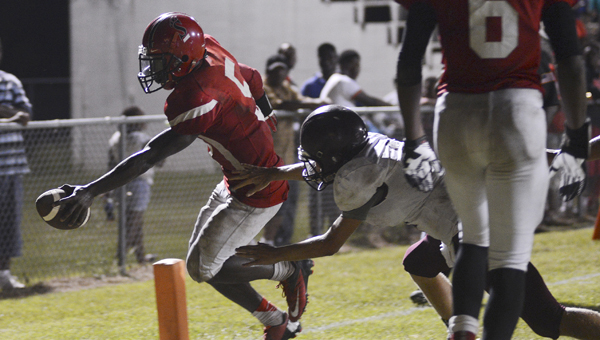 Southside starting quarterback Scott Cole, left, reaches over the goal line for a touchdown late in the Panthers’ 35-19 loss to the Satsuma Gators. –Jay Sowers

Southside outscored Satsuma 19-0 in the second half of Friday’s game in Selma, but it wasn’t enough to overcome the 35-point hole they dug over the first two quarters.

“In the first half they scored 35 points on us, and they were trying to score more on us in the second half, but we stopped them,” Flowers said. “At halftime I challenged the guys, I told them Satsuma was either going to beat us 65 to nothing, or we could come out and score 21 or 35 and that would be a win for us.”

Satsuma (2-0) got the scoring started less than two minutes after kickoff on a touchdown run by running back Marcell Oliver from the 1-yard line.

That first scoring drive, like many the Gators would have Friday, was set up by a Panthers turnover.

After going three-and-out after receiving the kickoff, the Panthers set up to punt the ball but a wide snap gave the Gators the ball at the 10-yard line.

Satsuma would get three running touchdowns from Oliver, along with a touchdown reception by Drake Mercer and a blocked punt run back by Jared Landrum.

Despite the dominating first half, second year Satsuma head coach Scott Rials said he wants to see more from his team in the future.

“We weren’t a well-oiled machine like you need to be to get to the next level,” Rials said. “I told the guys we left probably 17 points on the field in the first half, with missed field goals and missed opportunities in jus the first half.”

Rials, whose team went 3-7 last year, said he wants his team to use Friday’s game as a lesson on why it’s important to play hard for both halves.

In the second half, Southside got two touchdown runs from starting quarterback Scott Cole and another from running back Jhalandius Sullivan.

Despite the rough start and the game’s final score, Flowers said he would take plenty of positives from his team’s performance in the second half.

Southside (1-2), plays at home next week against Monroe County.