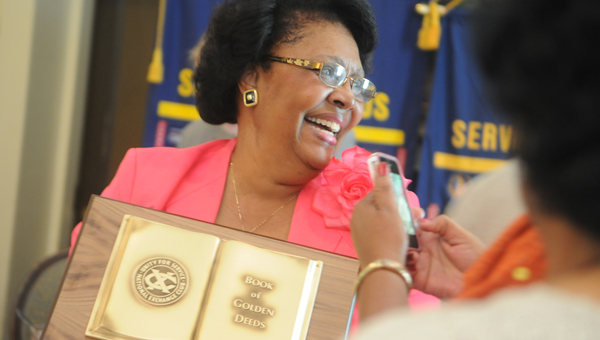 The Selma Exchange Club named Selma resident Nancy Sewell as the 46th recipient of the 2014 Book of Golden Deeds Award.

The group held a celebratory luncheon Wednesday at St. James Hotel, where they awarded Sewell with a plaque for her achievement. Sewell’s various community service acts earned her the award, which is given annually.

“The candidate has to volunteer for things that represent the community, city and county and be an asset to the community,” said KellySue Giampietro, the president elect for Selma Exchange Club. “[Sewell] is well-seasoned and well-rounded, and she has a really great attitude.”

Sewell leads the Selma’s Reading is Fundamental Program, serves as Brown Chapel AME Church’s Sunday School teacher and Board of Trustees member and serves as Alpha Kappa Alpha Sorority member. She has previously served as the library media specialist for Selma City Schools, a member of Selma City Council and much more.

Like every other winner, Sewell will be recognized in the Selma-Dallas County Public Library as a recipient of the Book of Golden Deeds Award.

“I am honored to have received such a prestigious award, especially when I look at the long list of recipients,” Sewell said. “I just don’t feel that I am deserving. Nevertheless, I shall always work to uphold the principals of the Book of Golden Deeds.”