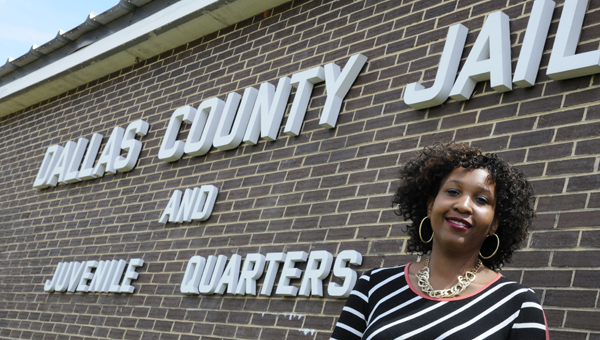 Selma resident Jerria Martin heads to the Dallas County Jail Saturday for her Circle of Hope minstry. During her sessions, she minsters to female inmates of the jail. (Sarah Robinson | Times-Journal)

If you told Selma resident Jerria Martin more than five months ago that she would be leading a jail ministry, she wouldn’t be able to imagine it. But after more than a dozen Sundays visiting the female inmates in the Dallas County Jail to spread the word of God, she sees the experience as a blessing.

Martin now leads her own Circle of Hope ministry, where she meets the female Dallas County Jail inmates every Sunday at the jail to speak about Bible verses they can relate to their life situations. She spoke about the Prodigal Son parable found in Luke 15:11-32 during a special Saturday session.

“I’ve seen lives transform,” Martin said. “I’ve seen some of the meanest, hardest want-to-be-thug women breakdown, cry and just let every thing all out to make me understand their pain, so I can pray for their happiness.”

When Martin first joined a discussion with jailed women, she was serving as an invited guest speaker for one of National Voting Rights Founder Faya Rose Toure’s educational speeches to the inmates.

Martin laughed as she explained that none of her life experiences had prepared her to speak to troubled jail inmates, not even her college experience at Princeton University. Martin said she had no clue what she would say or do during the session  with Toure.

She reached out to God to guide her through the big discussion. At no surprise to Martin, He answered her prayers.

“God’s word just came,” Martin said. “I began to start sharing scriptures and those scriptures stood out to them. It was stuff that they remembered hearing before. It was things that really ministered to them.”

Inmates she had never met prior to that day began opening up, crying and talking about their most personal hardships.

After a successful session, Martin continued to return as a guest speaker.

She eventfully decided to speak to Dallas County Jail Warden Dave Brown about starting a jail ministry, which she calls the Circle of Hope.

Martin learned after several sessions that her initial intent to help others has helped her.

She said every visit leaves her anticipating the next.

“It has brought me hope,” she said. “It empowers me to give back more to them.”

Because the jails are designed to hold suspects awaiting trial or a serving short sentences, Martin sees three to four new faces weekly.

“The crowd changes, but the great thing is that the message of hope stays the same,” she said. “Every time I’m out there, I make a different impact.”