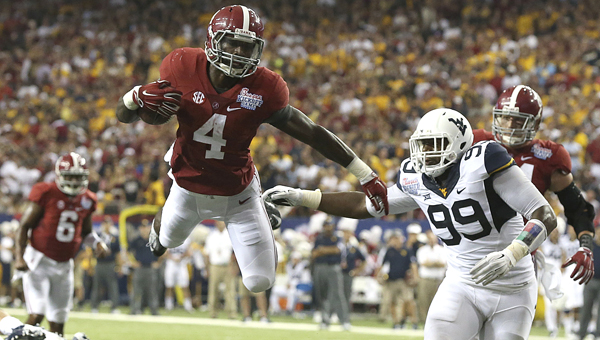 Alabama running back T.J. Yeldon dives into the end zone during the Crimson Tide’s 33-23 opening win over West Virginia at the Georgia Dome in Atlanta. Yeldon ran for 126 yards and two touchdowns in Alabama’s victory. — Kent Gidley | University of Alabama

ATLANTA — Blake Sims took a seat on the bench next to Jake Coker after leading Alabama to a score and the two chatted for a few minutes before it was time for the offense to go back on the field.

Conversation was the only thing Sims and Coker shared at the Georgia Dome. The quarterback job, Sims had that all to himself.

The fifth-year senior played well enough in his first career start to keep playing, getting plenty of help from Amari Cooper, T.J. Yeldon and Derrick Henry, and the second-ranked Crimson Tide held off West Virginia 33-23 on Saturday.

Sims was 24 for 33 for 250 yards, added 42 running, threw one interception in the fourth quarter, and took every meaningful offensive snap.

Tide coach Nick Saban said leading into the game that both Sims and Coker, the Florida State transfer, might play but there was only one point during the game that he thought about pulling the starter.

It came in the second quarter.

“But all in all for him to throw for 250 yards, he did a pretty good job of executing all in all and I’m happy with his progress,” Saban said.

He added “We’re looking forward to how we can help him improve as well as Jake, too.”

And Alabama needed all the offense it could get because West Virginia found plenty of soft spots in the Tide’s D.

The Mountaineers’ up-tempo spread gave Clint Trickett his pick of open receivers, and he took advantage with 365 yards passing.

But West Virginia didn’t take full advantage, dropping more than a half-dozen catchable pass, including one off the hands of Elijah Wellman near the goal line that would have been a sure TD early in the fourth quarter.

“Yeah, it’s frustrating,” West Virginia coach Dana Holgorsen said of the final result. “You play against a really good team and you’re in position in the fourth quarter to be able to win the game. I mean you don’t have those opportunities very often.”

“We really had the confidence that we were going to compete,” Trickett said.

Henry scored the only touchdown of the second half on a 19-yard run midway through the third quarter to put Alabama up 27-17. It was all field goals from there.

Coker warmed up briefly on the sideline in the second quarter after Saban told him to get ready, but that was it until it was time for victory formation at the end.

Saban has another Tide team ready to roll. The biggest question in the preseason was who would replace quarterback AJ McCarron, but it sure looked as if a defense that struggled at times last year against spread offenses could be a problem again for the Tide. Maybe the bigger question is who will replace All-American middle linebacker C.J. Mosley.

The Tide were also missing linebacker Trey DePriest, held out one game for an undisclosed NCAA violation.

Marshall, Auburn roll by Arkansas in second half