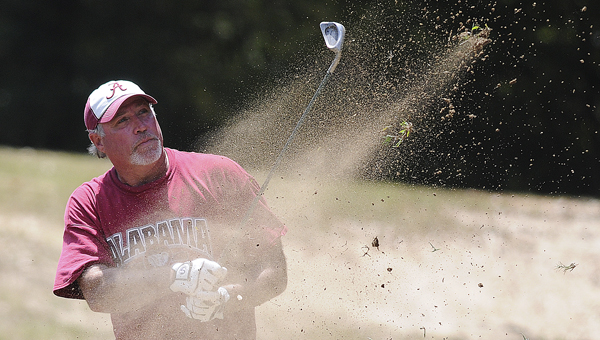 Jeff Levins hits from a bunker on the eighteenth hole during the Sav-A-Life golf tournament Saturday at Valley Grande Golf Course.–Daniel Evans

VALLEY GRANDE — Over 60 golfers spent their Saturday playing the game they love, while also helping out a local non-profit.

Selma-Dallas County Sav-A-Life held its annual golf tournament fundraiser at Valley Grande Golf Course Saturday and earned around $9,000 that will go towards the every day operations of the ministry and other needed projects.

Sav-A-Life is a non-profit that works with anyone dealing with a crisis pregnancy.

“It’s really vital to the ministry,” said Jennifer Dobbs, executive director of Selma-Dallas County Sav-A-Life. “If we don’t have these fundraisers, we do not make enough money monthly. We don’t get any set of government funding so we rely solely on individuals or churches to fund us so we don’t get enough of that monthly to keep us going. It’s the fundraisers that allow us to keep offering our services for free to the community.”

Dobbs went to run an errand at one point Saturday and noticed a lemonade stand being run by two local children. She stopped on her way back and bought as much lemonade as she could with the money she had on her. A little while later the children walked up with all the money they had earned and donated it to Sav-A-Life, which was a big surprise to Dobbs.

“We just thought they were cute little kids doing a lemonade stand,” Dobbs said. “A few minutes later, they came up and gave us the money.”

Although Sav-A-Life was the clear winner in Saturday’s tournament, the team of Moses Ngirailab, Ray Hollingshead and Douglas Coats had a pretty nice day as well. The trio shot a 17-under, 55 to win the tournament.

“I only play in two or three tournaments a year because this is less about playing golf,” Coats said. “This is about supporting the ministry of Sav-A-Life and saving children and what it does for families. I enjoy the tournament but I would play in it just for what it does. If I didn’t have good partners and couldn’t win, I would still play in this tournament.”

Luckily for Coats, he had great partners Saturday as the team shot a 27 on the front nine, which included a birdie on every hole except for the fourth.

The second nine was a lot of the same, as the group shot 28 with eight birdies.

“We had fun,” Ngirailab said. “We had nine people playing together and it seems like we were just lucky hitting close shots. Ray made one good long putt but the rest of them were pretty short.”

The second place team was Mayor George Evans and his sons Duane Evans and Patrick Evans.

The trio of Evans’ shot a 15-under, 55. Third place was the team of Steve Smitherman, Ron Steward and Ricky Seymore, who shot 13-under.

A total of 23 teams took part in Saturday’s tournament, which was a three-man scramble.

The Selma defense made it tough for Southside to find positive yardage during Friday’s game at Memorial Stadium. Southside’s running... read more