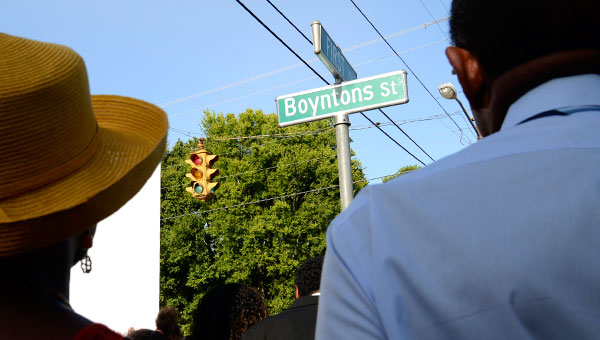 Above, elected officials and community members look up at the new sign for Boyntons Street during a ceremony Saturday afternoon. Below, the event feature songs, poems and speeches.–Jay Sowers

Amelia and Sam Boynton have finally been honored for their civil rights work with the official renaming of a portion of Lapsley Street in their name.

A renaming ceremony held Saturday in the middle school cafeteria at R.B. Hudson Jr. High School attracted more than 100 people. After the program concluded, those gathered walked outside to witness the unveiling of the first Boyntons Street sign.

The section of Lapsley Street between J.L. Chestnut Boulevard and First Avenue is now named to honor the pair whose names have become synonymous with the fight for equal rights.

Ward 7 councilwoman Bennie Ruth Crenshaw, who lead the charge to rename the roadway after the Boynton’s, said the pair are worthy of the honor.

“They are very deserving of this honor. Amelia has always been an inspiration to me,” Crenshaw said. “What she brought to the table, her courageousness, should send a message to all of us today that you have to stand for something, or you’ll fall for anything.”

Bruce Boynton, son of Sam and Amelia, said he was glad to see the service of his family remembered in the renaming of the road.

“This is certainly something that’s time is way passed due,” Boynton said. “Those two people risked their lives beginning in the 1930s for civil rights, so my reaction is that I am excited something has been done, but it is way overdue.”

Malika Fortier told audience members to remember the hard work and determination the Boynton’s put into the civil rights movement.

“That dream, that vision, is one that we have to continue to work for,” Fortier said. “I heard Miss Boynton say one time, ‘the best way you can honor me is to keep on fighting’, and so I challenge and encourage each of us to do that.”

As the event came to a close Saturday, Crenshaw reflected on the work it took to get the street renamed for the family who gave so much for other.

“This has been a journey, and it has been a wonderful journey,” Crenshaw said. “I knew it would end right where we are today.”

The Selma defense made it tough for Southside to find positive yardage during Friday’s game at Memorial Stadium. Southside’s running... read more