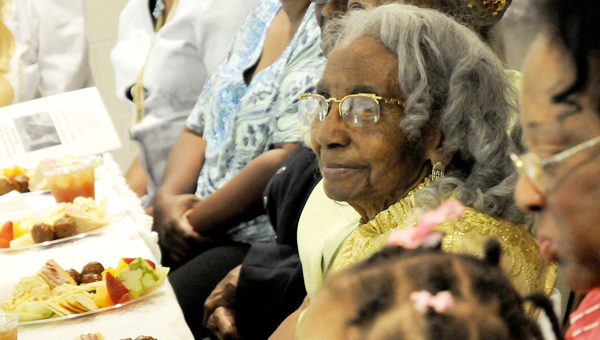 Selma resident Elizabeth Brown smiled as she listened to loved ones sing happy birthday to her for the 100th time.

Brown celebrated her 100th birthday with family and friends Sunday at Calvary Missionary Baptist Church. The Orrville native received birthday wishes from the City of Selma, Town of Orrville, Dallas County Commission, State of Alabama, U.S. State Congress and the United States of America in the form of resolutions, proclamations and a presidential birthday greeting.

“I just thank God for everything,” Brown said. “I don’t care how little it is. If I manage to get through something, I thank Him for it.”

Brown has served as a Sunday school teacher for Calvary Missionary Baptist, dietarian for Mary Thompson Hospital for Women and Children, songwriter and more, but said she takes the most pride in her successful career as a seamstress.

Over the years, she began using her passion to benefit others, creating baptismal gowns, communion table and pulpit curtains and skirts, altering wedding dresses, even her own, and creating unique pieces for her six siblings and several friends.

She made designs showcased in the Ebony Fashion Show and tailored clothing for famous celebrities, such as Bill Cosby and Hugh Heifer.

Not only has Brown been employed as a seamstress for various garment factories, laundry mats and the Lehnoff School of Music and Dance in Chicago, but she also managed her own laundry, cleaners and alteration business called the Wheaton Center Valet in Glen Ellyn, Ill.

“I would cut up anything if you didn’t give me something to sew,” Brown said with a chuckle. “I think that talent was something I was born with.”

“Very few people have reached the milestone to become a centenarian, accomplished the things Ms. Brown has accomplished, experienced the things she has experienced and still look great, have a sound mind and remain more active than individuals half her age,” Edwards said.

Brown’s friend Maggie Drake-Peterson was one of the many people to share her love and respect for Brown at celebration. Drake-Peterson described her as a great woman and indication of God’s grace and mercy.

“She’s here to help us do better,” she said. “She’s lived through so much, and we can learn so much from her.”

Working on cars is a lifelong passion

Frank Blocton searches reaches for a socket wrench while replacing two belts on a car at his Selma Avenue garage... read more