Three lead after the Club Championship’s opening round 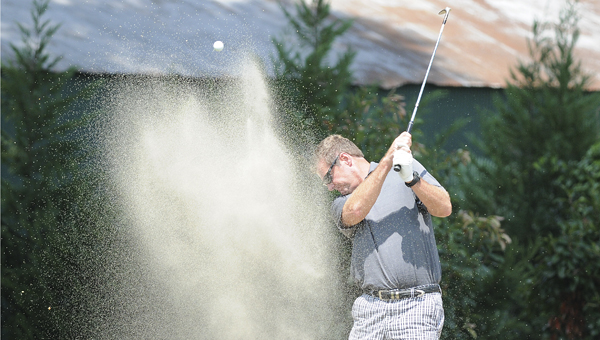 Keith Bradford hits from a bunker adjacent to the ninth green during the first round of the Selma Country Club Championship. Bradford shot a net score of 76 and is ten shots behind leader Jim Mason. –Daniel Evans

It might be a club championship for the ages.

Don Blanton, 67, is tied for the low-gross score lead after the first day of the Selma Country Club Championship with Denson Henry and Phillip Nader at 1-under. Blanton needed a birdie on the 18th hole to shoot his age, but instead three-putted and had to settle for a double bogey that left him tied at the top.

“I was thinking about shooting my age,” Blanton admitted after the round. “I’ve done that a few times, but tomorrow should be fun.”

Blanton, who has won the Selma Club Championship numerous times over the years, said he’s going to have to play even better Sunday to win.

“I’ve got to shoot under par tomorrow to have a chance,” Blanton said. “These young boys are much better than I am, but with a little luck I could be right there.”

Henry said he drove the ball great Saturday, which allowed him to score well, but he’s already looking toward Sunday.

Nader finished sixth last season, but appears poised to top that finish after an impressive opening round that has him tied at the top as well.

Another shot back is Beau Boyd at even par, 71. Boyd finished seventh in 2013.

Six-time champion Paul Garner, who has won the Club Championship the last two years, shot a 72 and is two shots behind.

“I couldn’t do really anything, but then I came to my senses and ended up coming through with 72,” Garner said. “I’m really happy that I’m still in the tournament and we will see what happens tomorrow.”

Last year Garner shot 68 on the final day to win the tournament by one shot over Will Pearce. He’ll need to come from behind again to win the championship for the seventh time. Pearce is right in the mix as well after shooting 73.

The Selma Country Club awards titles for the low-gross champion, which is the number of strokes played without handicap factored in and the low-net champion, where handicap strokes are discounted from a player’s score.

Jim Mason leads the low-net score competition after shooting a 66. Henry is only one shot behind,  which gives him a legitimate chance of winning both titles. The low-net score champion is awarded the Hikeastep Trophy, and it looks like it’s going to be a tight finish. A total of 20 golfers are within six shots of the low-net score lead.

Following a season where scoring was a challenge, Meadowview Christian may have found some offense. The Trojans opened their season... read more