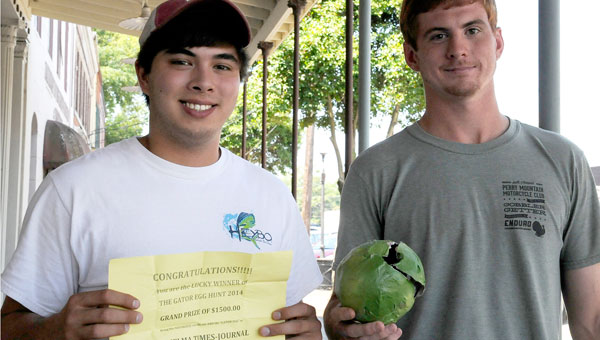 Michael Ward and Dallas Prescott pose with the gator egg and certificate that earned them the $1,500 Gator Egg grand prize. (Josh Bergeron | Times-Journal)

Gilda Gator’s egg has been found.

Selma residents Michael Ward and Dallas Prescott found the egg near Paul M. Grist State Park, located on 1546 Grist Road near Selma, putting an end to the annual Times-Journal competition. The two said they were excited to find the egg and win the $1,500 prize.

“It was a relief,” Ward said. “We were super excited.”

Ward and Prescott said they have plans to split the money, and “blow it” on whatever they see fit. The prize money inspired them to participate in the search, which they said was fairly easy.

Friday, the two men brought the egg and the enclosed notarized certificate to The Selma Times-Journal, which conducted the hunt.

Prescott has found won the egg hunt once before.

Contestants had to visit participating sponsors to locate the 12 clues directing them to the egg.

Just as in previous years, the egg was placed in a public place.

“It is fun to see how popular this has become,” Times-Journal advertising director Tina Yelverton said. “But, none of this would have been possible if were not for our sponsors. We are already thinking about next year’s hunt.”

The Arts: Ziccardi shares her love of music

Since she retired and moved to Selma in 2006, Nancy Ziccardi has continued to share her passion for all kinds... read more