Spivey enjoys sharing her love of Selma in museum

It’s fitting Beth Spivey took over as director of the Old Depot Museum shortly after Valentine’s Day in 2013, as she now gets to share her love of Selma with visitors from around the world.

Spivey, who spent her childhood years in the rural Lowndes County town of Petronia, said she relishes in the opportunity she has to give tourists a positive first impression of Selma. 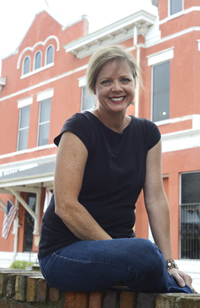 “I love being able to give people a good first impression of Selma, especially when they aren’t expecting to like it here,” Spivey said. “I love showing people that it is good town full of great people. This is just a wonderful small town where people care about each other. I just love it here.”

Asked why she loves the city, Spivey said the city’s small town feel and the caring nature of its people are first to mind.

“When people come to town, they expect the worst. They think we are still so segregated. I tell them to head over to the post office and just watch for a while. I tell them to just stand there for a while and see if people are rude to each other. They will hold the door for each other and we ask if each other are having a good day.”

Spivey said she would be hard-pressed to find such a friendly environment in more populated areas.

“I went to New York City, and I didn’t like it too much,” Spivey said. “Nobody talks to anybody. There are sights to see but people are too busy to talk to you.”

Spivey has traveled to various big cities across the country and lived in Mobile for a short time, but she said nothing compares to the friendly environment found in Selma.

“I love knowing everybody,” Spivey said. “I am very comfortable here. When I go to a big city, I am looking for somebody to say hello to or to wave at, and they just don’t to it.”

Talking about her work at the museum, Spivey said she has enjoyed learning something everyday about the storied history of Selma.

“Everyday I really do learn something new,” Spivey said. “We have some many people from all around the world come through this town and I just love learning about their cultures. It’s just amazing.”