Selma artist Jo Taylor has grown in her love for pottery 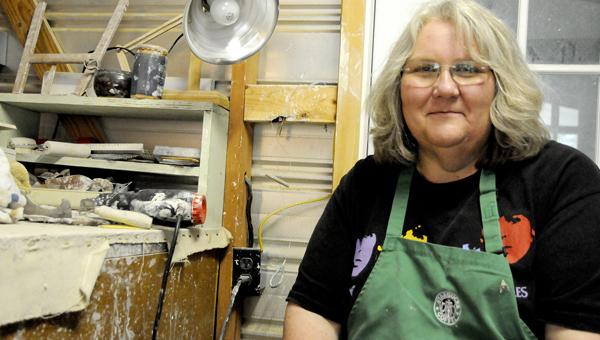 Inside of a small building on Landline Road sits Jo Taylor’s creations. Some of Taylor’s creation’s are similar in design, but each has its own unique flair. Her work ranges from small “drunken attitude” cups to pieces that pay homage to a Japanese technique.

Taylor takes pride in her work, and is especially proud of the fact several of her “drunken attitude” cups are in the Montgomery Museum of Fine Art’s gift shop.

“One of the ladies at the museum started calling them ‘drunken cups,’ so I decided to call them drunken attitude cups,” Taylor said. “They just look like they are kind of drunk.”

Taylor’s collection of work may be wide ranging, but that’s part of why she enjoys pottery, which is her primary focus.

“There’s so many different areas, or ways, that you can work with clay,” Taylor said. “You can take five or six glazes and come up with some of the most beautiful colors and they are still not the same.”

Though its mostly a hobby, Taylor exudes passion about her work. The start of her artistic journey, however, has an unlikely and tragic beginning.

Taylor and her husband Mark, married in 1978, had been married 13 years when they received news their first baby was on the way.

“Six months later I lost her; I lost the baby,” she said. “As I was coming back out of the depression and grief I wanted to create and started taking water color painting lessons.”

The class instructor encouraged Taylor to go to art school.

While attending Auburn University-Montgomery, she touched clay for the first time.

“From the time I touched the clay, it was all over with water colors,” Taylor joked. “I was memorized at what I could do with it. I could punch it, kick it, form it, sculpt it, make utilitarian things, make funky things, sculptures. It was just unlimited.”

Besides the varied ways to make clay pieces, Taylor said she also liked the idea of making a piece look good from all sides — the top, sides and even the bottom.

“As my husband says, ‘on a wing and a prayer you’ve gotten two art degrees and we didn’t have any money,’” Taylor joked.

In 2006, Taylor was again struck by tragedy, when her mother died. Taylor’s mother left her a small inheritance and she invested it in adding to her studio.

“I can’t think of anything your mother would rather you do with that money that to buy a new studio,” Taylor recalled her husband saying.

Her studio even has an original name — Studio 903. The name comes from Taylor’s childhood address 903 Franklin Street.

Dating back even farther than her formal education, Taylor attributed part of her creativity to childhood creativity.

“We used to build little villages in our backyard,” Taylor said. “Then we would go out in the sand and make rows for cotton and produce. We made up all our games and played that way.”

In a way, art has flown through Taylor since birth, as both her mother and grandmother were quilters.

With years of creativity and artwork, Taylor’s collection of completed pieces has steadily grown, but now she is working on a new, long-term project to profile her southern heritage.

The first, test piece is the small, dark green shack. The shack’s front door acts a drawer. Taylor is unsure exactly how future pieces would look, but it’s a set that Taylor says is important for her to complete.

“It’s going to back to southern roots, parents and grandparents living in shotgun houses,” she said. “The outside may have looked ugly but they were happy.”

With one, major project on the horizon, Taylor reflected on her past. In her time working with pottery, Taylor’s pieces have been displayed in the Selma Art Guild, Black Belt Treasures Cultural Arts Center and the Montgomery Museum of Fine Arts.

Taylor said she was especially excited to get an invitation to sell her work in the Montgomery Museum of Fine Arts.

“I remember thinking ‘this is so cool,’” Taylor said.

While reflecting on the past, Taylor said arts could be a vital part of Selma’s future and improved quality of life.

Spivey enjoys sharing her love of Selma in museum