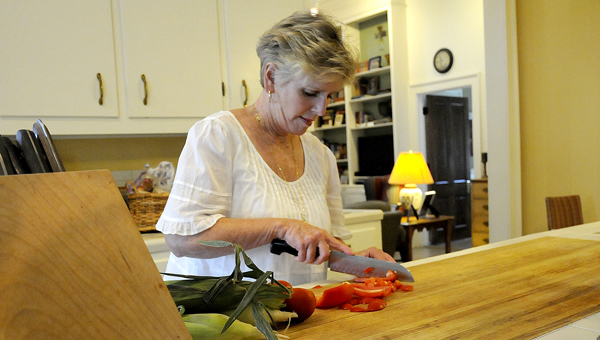 When Kay Clapp was teaching third grade at Byrd School, her home’s location was perfect. She could see the school from her front porch, directly across Lapsley Street.

With three of her four children attending the school, Clapp said having home across the street made life a little easier.

“It really was convenient if I had to meet the plumber,” Clapp said. “I just sent my children to the library or someone came in for 10 minutes, and I would come over here and let them in.”

Many of the Byrd School families knew the green house across the street from seeing it throughout the school year. Clapp said the neighborhood was a trick-or-treating hotspot for Byrd students on Halloween.

“It was so nice because many of the teachers lived in the neighborhood, and they walked to school,” Clapp said. “For years, I had to buy enough Halloween candy for 300 children because everybody at Byrd School wanted to go their teacher’s house to trick or treat,” she said. 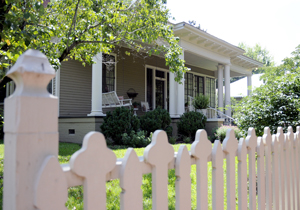 The three-bedroom, four-bath house has been familiar to students and their families since it was built in 1910. Originally, the house was one of several in the area doled out to members of the Henderson family. Known as the Welch house, Mrs. Welch ran a kindergarten out of the sun porch, which has been converted into a home office with tall windows.

The house was built to entertain, with plenty of open rooms branching off a wide central hallway that stretches the length of the house.

Clapp has been living in the house since 1984, just after a major remodel gave the building new life.

“The guy that remodeled this house was a gourmet cook, and that’s why I have such a fine kitchen,” Clapp said. “This is really the best kitchen in the whole world.”

The spacious kitchen anchors the house from the center of the first floor. No expense was spared here, making the house an event-hosting dream.

Built into the island is a thick wooden cutting board long enough for several cooks to chop, slice and dice simultaneously.

On the counter is a built-in marble slab for rolling out pastries and making candies.

Cabinet space abounds, to the point where Clapp said several of the cabinets stay empty. 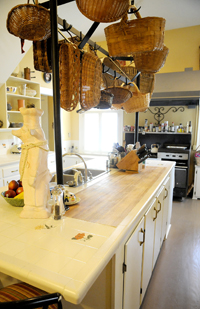 The centerpiece of the kitchen is the commercial Garland stove. With six burners, two ovens, a griddle and a broiler, Clapp said she is well equipped for any size get-together.

“I swear when I die, they’re going to put it on top instead of a tombstone because I love this stove,” she said. “This is my pride and joy.”

Along with a generous space to prepare meals, the house features several areas to eat, drink and, most importantly, socialize. Out the back door is a large, two-tiered porch with plenty of space in the shade under an awning. Out front, a traditional Southern porch offers a great place to swing, sip on tea and watch the world go by along Lapsley Street.

Clapp said when her children were growing up, they spent most of their time upstairs, where angled ceilings create perfect nooks and crannies for hiding, reading and playing.

While she said she misses the days of walking across the street to Byrd School, cooking in the best kitchen she’s ever had and listening to her children playing in the kid-friendly upstairs, she will always cherish her Lapsley Street home.

Selma artist Jo Taylor has grown in her love for pottery