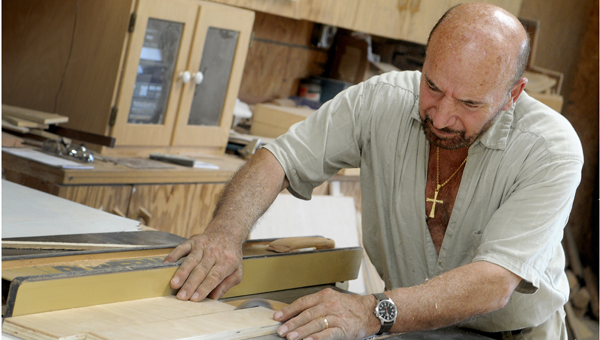 Selma resident Nico Giampietro never knew his lifetime hobby would lead to the successful custom woodwork business he has today, but he’s happy it did.

Originally from Bari, Italy, Nico has always enjoyed working with his hands. Inspired by and named after his grandfather Nicola Vinciquerra, Nico grew with a desire to do wood work just like the well-known furniture craftsman Vinciquerra.

Captivated by the textures and smells that come from various types of woods, Nico crafted his first piece at 7-years-old, when he created a flute within two days with wood he found in a trashcan.

“I took my time cutting and carving,” Nico said. “When I finished my job and looked back at it, I was very proud of my job.”

Nico continued to do woodwork as a hobby, creating even larger, more complex pieces. In high school at the time, Nico built a bedroom suite complete with an armoire for his parents.

After graduating high school, he went on to serve in the Italian Calvary while doing some woodwork in his spare time.

For a short period in Nico’s life, woodwork was not his main interest.

He fell in to music, like his father Giuseppe Giampietro, a former classical violist and artist.

In 1984, Nico traveled to America solely to help his sister, whose husband, an America citizen, became ill. He eventually grew closer to the country and later made the decision to stay in the U.S., where he met his wife KellySue Giampietro.

He uses walnut, cherry, cypress, cedar purpleheart and other woods to design anything from simple desks to large butterflies replicas for customers.

“I love working with Mahogany the most,” Nico said. “It stays straight, solid and stable.”

Not matter what he’s creates, Nico said he makes an effort to have his work standout from work produced by other companies or individuals.

“There are things that you see here that you won’t see anywhere else,” Nico said. “Everything is different.”

He spent June 2008 to September 2008 creating 47 6-foot solid, treated wood butterflies, which were strategically placed around Selma to represent Selma’s title as the butterfly capital city of Alabama. The work was part of Dallas County Arts Alliance’s Butterfly Project.

While several of his customers may know what they want, others give Nico the creative license to design what he sees fit.

“Some people want something specific,” Nico said. “Some people don’t know exactly what they want, and I try to help.”

Depending on the item and its size, it can take months to complete a project.

He’s created grandfather clocks, desks, baskets and more, but he has yet to choose a favorite.

Giampietro spends eight to nine hours daily on his work, and he said it’s all worth it to impress customers with a high-quality finished product by doing something he truly enjoys.

The ‘art’ of canning is making a comeback

The Dallas County Extension Office has recently held workshops offering advice and training for those wanting to take up canning.... read more