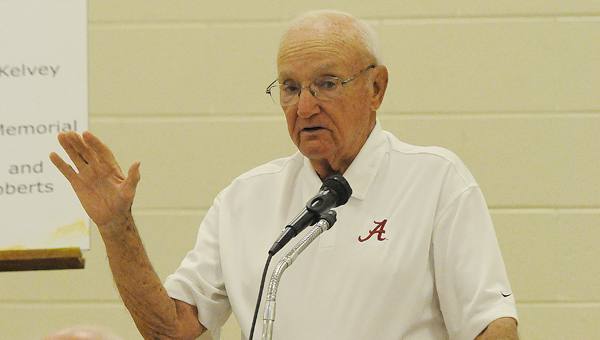 Coaches and players have changed at the University of Alabama through the years, but Eddie Conyers is still there.

Conyers, who has served as the Crimson Tide’s practice referee since Paul “Bear” Bryant was coaching at Alabama, spent Monday night sharing stories with the Dallas-Wilcox Bama Club at the Carl C. Morgan Convention Center.

Conyers said Bryant made ordinary people extraordinary while Stallings took a “plain vanilla” approach to offense. He said Saban is completely different, because he loves to recruit top talent.

He told several stories throughout the night, including one about the first high school game he ever refereed — which was in Selma.

The game was between Selma and Andalusia at Memorial Stadium and although he was confident, he wasn’t prepared when a fluke play took place that likely would have confused even a veteran referee. Andalusia lined up to punt and the ball went backwards, causing a lot of confusion.

“It starts going over the punter’s head and the defensive back was giving the fair catch signal behind the line of scrimmage,” Conyers said. “To this very minute, I still don’t know if you can [fair catch] it or not.”

Conyers was at Alabama’s practice Monday before traveling to Selma to speak at the Bama Club and he will be back at practice Tuesday at 2:30 p.m.

He said all five of Alabama’s quarterbacks look good so far — including Jacob Coker and Blake Sims, the favorites for the Crimson Tide’s starting job.

Ray Hollingshead putts for birdie on the 18th hole during the singles competition of the 2014 Masters Games golf touranment... read more