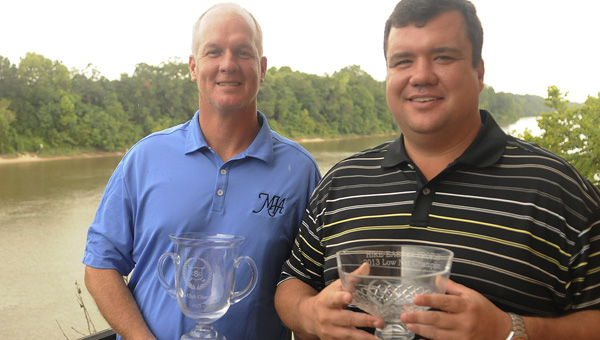 Paul Garner, left, won the Selma Club Championship last year for his sixth overall title. Garner appears to be the favorite going into next week’s tournament, where Kory Taylor, who finished with the low net score, and a loaded field of local golfers will try to stop him from winning his seventh championship. (File Photo | Times-Journal)

Going into this week’s Selma Country Club Championship, it’s clear to most in the field that Paul Garner is the player to beat.

Garner has won the Club Championship six times, including last year when he rallied past Will Pearce on the final day. The tournament will start Saturday, Aug. 16 and finish up Sunday, Aug. 17, but most expect Garner will have a say in the final outcome considering he’s won the last three times the tournament has been played.

Tommy Burns, PGA professional at the Selma Country Club, said Garner has to be the favorite going into the tournament.

“Paul is kind of the leader — everybody gets to look at the back of his head,” Burns said. “If you beat Paul, you are going to play well.”

Garner said he doesn’t even think about the six club championship trophies he’s won, because every year the competition is different and the golf course plays a little different.

“I don’t know why I’ve been successful in this particular tournament, but I’m certainly not successful in all of them,” Garner said. “I have many more losses than I have wins.”

The tournament typically includes between 60 and 70 total players.

The Club Championship is the final tournament of the year for the Selma Country Club, making it an unofficial end to the golf season. Burns said he’s looking forward to this year’s event, because he expects it to be very competitive at the top.

“The championship flight is very competitive,” Burns said. “It kind of tells who the best players are here. It’s about bragging rights. Nobody wants to listen to anybody else tell them they are better than them.”

Although Garner has won the overall gross score competition six times, the championship also gives out the Hikeastep Trophy to the low net score of the week. Last year’s low net winner was Kory Taylor.

Registration is underway for the Upward Soccer program at Valley Grande Baptist Church. The program, which will include up to... read more