Local junkyard serves as outside classroom for troopers, officers 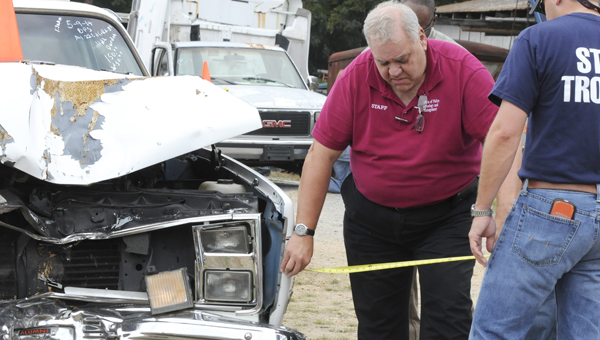 fine measurements: More than two dozen state troopers and other law enforcement personnel were at Al’s Towing in Selmont Friday for an advanced accident reconstruction class. The class was provided through the Alabama Criminal Justice Training Center in Selma and taught by instructors from the University of North Florida. (Josh Bergeron | Times-Journal)

A horde of state trooper vehicles and law enforcement from several Alabama cities on Friday took over Al’s Towing in Selmont.

Despite the large law enforcement presence, no one was arrested. Instead of a drug raid or felony warrant arrest, the troopers and police officers were in the midst of a traffic accident reconstruction class, meant to teach officers ways to determine minute details of an accident.

Sgt. Jason Black, an Alabama State Troopers, who coordinated the class, said most of the students in the class were experienced rather than newcomers to law enforcement.

“In normal traffic homicide school, they learn some formulas, but the formulas they learn in the class are a lot more advanced,” Black said. “When two vehicles collide, they will be able to find out how fast they were going when they collided.”

The class often gets into complicated math, according to Larry Williams, an instructor with the University of North Florida.

Part of the class’ reading material included a thick, bound book with dozens of math formulas.

“Just about everything in a motor vehicle crash is based off of right angles, so that’s where the trigonometry and geometry come in,” Williams said.

One of the class’ participants was Joseph Donofrio, from the Troy Police Department, who said math and problem solving was one reason the course interested him.

“I feel like the training we are receiving can help us more accurately investigate an accident,” Donofrio said.

“Police departments may have officers who investigate the crash but aren’t reconstructionists because the state’s always there and they can fall back on us,” Black said. “When [Donofrio] is done here, he will actually have more certification than a lot of troopers on the road.”

The class, Black said, is provided through the Alabama Criminal Justice Training Center in Selma and uses instructors from the University of North Florida’s Institute of Police Technology and Management. A total of 21 troopers and nine outside agencies participated in the training. The students wrapped up the first week of the class Friday and have four more to go.