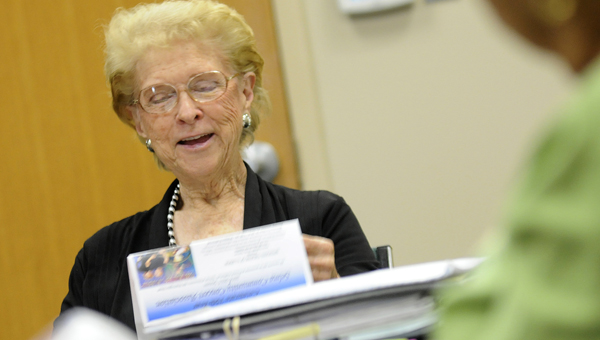 Selma Community Concert Association President Doris Holland met with her association Wednesday afternoon to prepare for their 2014-2015 concert season. Scheduled for October through February, the series will include performances from the Spencers Theatre of Illusion, The Gold Standard Band, The Auburn Singers and the Capitol Sounds Concert Band. (By Sarah Robinson | Times-Journal)

Planning for what some consider shows seldom seen in Selma has begun.

Leaders of the Selma Community Concert Association met Wednesday to prepare for their 2014-2015 concert series, which will features performances from Spencers Theatre of Illusion, Gold Standard Band, Auburn Singers and Capitol Sounds Concert Band from October to February. Wednesday’s meeting was one of four the group has every series to prepare for the concert season.

“We offer everyone in the community the opportunity to experience the pleasure, magic and education that live performances provide,” Association president Doris Holland said before later mentioning the need for more support. “When we have more people, it’s a more diversified board.”

The series will begin Monday, Oct. 20 with Spencers Theatre of Illusion presenting a 7 p.m. magic show at the J.A. Pickard Auditorium. According to the Spencers’ website, they have been named Performing Arts Entertainers of the Year for a six consecutive years and have been named America’s Best Entertainers twice.

Next, the Gold Standard Band will perform Nov. 13 at 6:30 p.m. at the Selma Convention Center during the Contributor’s Party and Concert, which is meant to recognize the hard work of the group’s donors.

The Auburn Singers will perform under the direction of Dale Farmer Tuesday, Jan. 20 at J.A. Pickard Auditorium with a concert for about 900 students at 1 p.m. followed by an evening concert for the general public at 7 p.m. From Auburn University, the group has been in constant demand all over America and Europe, according to the Selma Community Concert Association.

The series will conclude Feb. 26 with Capitol Sounds Concert Band playing at J.A. Pickard Auditorium at 7 p.m. The bands play a variety of music from the past and present. Selma native Barbara Blanks, with be the featured vocalist.

Holland sifts through the offers, contacts potential candidates, and determines the costs of having that particular group or individual join the series.

Then, with some help from the board, determines which talents will be featured.

With various expenses, such as food and travel, the cost of the entire series can total as much as $28,000.

Much of the operational costs are funded through sponsor contributions and grants, such as the $3,000 grant the Black Belt Community Foundation awarded the Selma Community Concert Association in June.

Shirley Crear, who is responsible for managing ticket sales and membership, said much of the success of the concert series can be attributed to Holland’s great dedication.

Holland said she spends all year organizing the event.

“We have a wonderful president. Doris is very dedicated,” Crear said.

Holland said the process can be overwhelming and time-consuming, but it’s worth it to bring the pleasure of live concerts to Selma.

“When you go to the community concert, it’s like one big family,” Holland said. “It’s like a party. Everyone looks forward to it. They all smile and are happy.”

Individual performance tickets are not sold. For more information about season membership tickets, contact committee members Kitty Singley at 874-7056, Scott Hereford at 874-6621 or Holland at 875-9201.

The community calendar belongs to the readers

For many people, page 3 of the Times-Journal is a page that rarely catches their attention, but it is not... read more