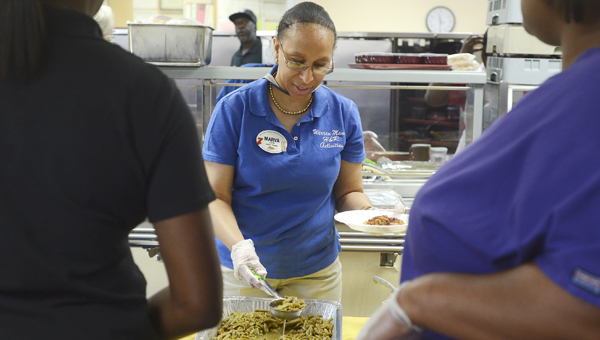 Marva Eaton, center, activities director at Warren Manor Health and Rehabilitation Center, serves up a plate of food that was donated by members of the Old School Truck Club on Thursday morning. (Jay Sowers | Times-Journal)

Sometimes, a meal can give someone so much more than just nutrition.

Members of the Old School Truck Club donated several pounds of grilled chicken and sides from the Highland Avenue KFC restaurant to three local retirement homes Thursday, providing residents with a warm meal and the message that they have not been forgotten.

“We get out and do this when we can,” said Kennedy Watts, president of the Old School Truck Club. “This is just our way of giving back to the community. People still care about the residents at these retirement homes. Selma still cares about these people.”

Watts and three other members of the club spent Thursday morning delivering the food, which they purchased with money out of their own pockets.

Watts said the Old School Truck Club, which is now made up of eight members, was started 27 years ago by a group of men who wanted to make a difference in their community.

“We decided we needed to get a group of guys together and do something constructive for the community,” Watts said. “We are trying to show people you can do good things without violence.”

Watts joined three other members of the club as they delivered the food to the Warren Manor Health and Rehabilitation Center, Park Place Nursing & Rehab Center and Lighthouse Rehab & Healthcare Thursday morning.

Linda Brown, administrator at Warren Manor, said residents there appreciate the food just as much as the chance to interact with Watts and the other club members.

“It makes the residents here feel appreciated to have outside groups bring in either entertainment or a special food,” Brown said. “It gives them a break from our facility-made food, and it also gives them a chance to comingle with other members of the community.”

Brown said the club’s donation of time, money and food was made even more special by the fact it was all their idea.

“We reach out to different groups to see if they’ll help us, but to have a group tell us how they are willing to help is a big deal,” Brown said. “It really gives me a sense of pride in this community that these people want to spend this amount of time with everybody here.”

More than shopping happened at the Selma Mall Thursday afternoon as residents of all ages showed up for an informational... read more