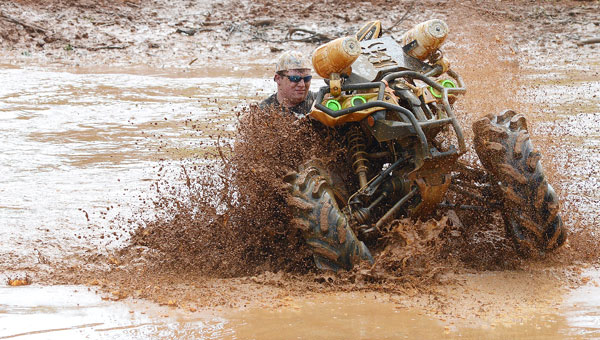 For some people, a day in the mud is nothing to complain about at all.

This past weekend, Valley Grande resident Darren McGilberry hosted another Big Daddy’s Offroad ATV and truck event in the mud on his property, and just like the five previous events this year, it was a big hit.

McGilberry’s son, Chambers, has driven dirt bikes and go-cart for four years, which can be a costly hobby when considering travel, fuel costs and hotel rooms.

“This is an idea we had to do something at home so we wouldn’t have to travel so much, and maybe make some money, too,” McGilberry said. “It’s two or more hours from here to the closest places that offer this kind of experience. There aren’t too many places for people around here to go and ride without trespassing.”

After this weekend’s three-day event attracted nearly 400 people from all over the region, it’s clear McGilberry is not alone in wanting some place to ride ATVs and trucks through the mud.

“We had people from Pensacola, Columbus, Ga., Mobile, Birmingham, Tuscaloosa and even Warner Robbins, Ga.,” McGilberry said. “We’ve ranged from 150 people to 600 people. I think a lot of it depends on heat and vacations.”

Big Daddy’s Offroad hosted the first mudding event in March, and McGilberry said the vast majority of people who have attended the different events have been happy with their experience.

“We have very few people that leave without telling me how much fun they have,” McGilberry said. “We’ve had complaints about the heat, but that’s not really something we can control.”

McGilberry said while he hopes the event continues to grow, he is pleased with the fan base he has built this year.

“We haven’t really made a lot of money yet, but when people are leaving and telling you they had a great time and they really appreciate having a place where they can bring their kids for a fun-filled weekend, it really goes a long way,” Gilbery said. “It means a lot to me.”

McGilberry hoped to host one event a month at his property on County Road 65, but he is planning on skipping August because of the heat, and start again in September.

He said he hoped to add more events to the calendar in the coming months and years, in hopes of attracting an even wider audience.

“I think because we have racing in our past and in our history, I could easily see this morphing into some type of racing activity,” McGilberry said. “We want to try and do some new things so people don’t get bored with it.”

Information about Big Daddy’s Offroad can be found on the event’s Facebook page, or by calling McGilberry at 608-3456.

How to help your student transition to college life

The date has finally arrived — you’re heading off to college and even though you’re excited, there are also some... read more