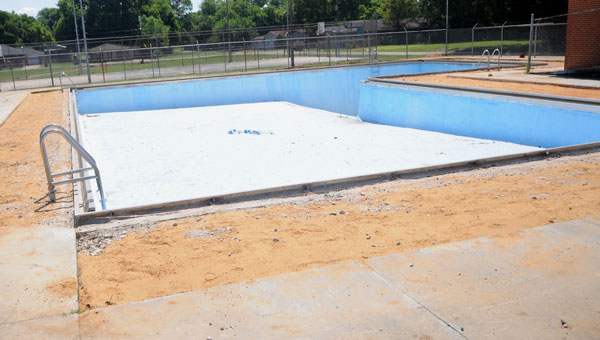 Unfinished: Broken bits of concrete were removed from the Dinkins Pool earlier this month, but one city councilman is worried that construction won’t be finished in time for his original deadline. (Josh Bergeron | Times-Journal)

The City of Selma’s Dinkins Pool may not be open before local schools resume classes, but Ward 8 councilman Michael Johnson hasn’t given up on completing renovations in August.

Originally, Johnson aimed to open the pool two weeks before school started, but he said a significant amount of work remains with city and county schools starting on Aug. 11.

“The way things are dragging now, I’m still trying to keep hope alive,” Johnson said about opening the pool before classes resume “Even though school may start, we are still going to try to give students an opportunity to swim in the school year. It may be a week after school is in.”

Construction is still in its first phase, which only includes replacing broken concrete. Johnson said he raised enough money for to pay for replacing concrete, but still lacks about $10,000 to complete the entire renovation.

The second phase is more expensive and includes sandblasting and painting the pool’s interior.

Currently, Johnson has $19,000 for the Dinkins Pool, mostly composed of city council oil lease funds, which can only be used for infrastructure-type projects. The total cost of the pool renovation is expected to be $30,000.

Johnson transferred a portion of his discretionary funds to his oil lease account to help with expenses. He is also asking council members to increase their donation amounts and hoping for outside donations to complete the project.

By working in phases, Parks and Recreation Department director Elton Reece said the city could pay for the project and continue to raise money.

The pool’s current condition was caused by a lack of funds annually allocated in the city’s budget, Reece said in a previous interview with the Times-Journal.

But annual allocations could be changing.

Johnson said he would ask for an increase in the fiscal year 2015 budget, specifically dedicated to the Dinkins Pool’s maintenance.

“It’s not a Ward 8 thing; kids from all around the city use the pool,” Johnson said.

The city council has ultimate authority over approving or amending the budget. Though, Johnson already has support from Selma Mayor George Evans.

“I certainly think that the pool should be a line item.” Evans said. “As to what the number should be, that’s something we will have to work on.”

Though not part of current renovations, Johnson also has a laundry list of other work, including: replacing the fence, painting the pool house and general cleaning.

Dinkins is the only city-owned, public pool in Selma.

It’s located on the corner of Dexter Avenue and Division Street and was built in the 1970s.