S.S. Selma missed World War I, but has a storied history 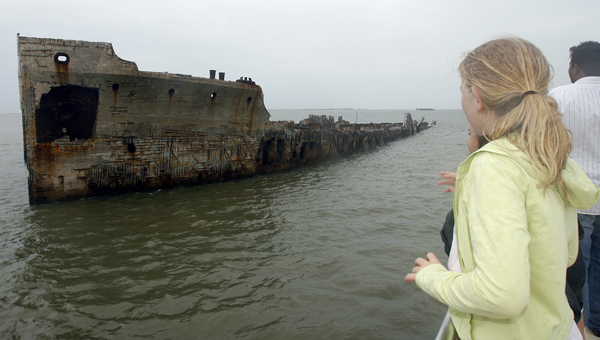 Visitors get an up close look at the S.S. Selma concrete ship during a tour of Galveston harbor aboard the Seagull II in October 2009. The World War I-era concrete ship is named in honor of the city of Selma. — Galveston County Daily News

A little piece of Selma and World War I history sits just on the coast of Galveston, Texas.

Though it now sits motionless in Galveston Bay, the S.S. Selma was built in the late 1910s to honor the queen city of the Black Belt for its war bond efforts.

A Mobile-area company built the ship’s hull mostly out of shale concrete, which allowed for buoyancy. The S.S. Selma was one of 12 concrete ships, but Selma was the largest and weighed 7,500 tons.

Despite the country’s large investment in the ships — about $50 million — none of them ever saw battle time. The S.S. Selma, specifically, was launched on June 28, 1919, the same day the treated of Versailles was signed. Because the treaty officially ended World War 1, there was little use for the ship in battle and the S.S. Selma became an oil tanker in the Gulf of Mexico.

Less than one year later, the ship ran aground in northeastern Gulf of Mexico, which created a sizeable crack in her hull. Historical accounts say temporary repairs were formed, but when the S.S. Selma was towed to Galveston for repairs, it was ultimately left near Pelican Island, in the Galveston Bay.

Historical accounts say the damage was repairable, but the crew had no experience with repairing a hull of concrete. The repair crew in Galveston decided not to repair the ship because of the possibility of incorrect repairs, according to historical accounts.

The ship was placed in a channel in the Galveston Bay and stripped of its valuable equipment.

The S.S. Selma was laid to rest on March 19, 1922, less than three years after its commission.

After decades of being battered by weather and waves, the ship sits rusted but is honored as a historic landmark.

In 1994, the Texas Historic Commission erected a landmark on Pelican Island to tell the ship’s history. The marker tells stories of plans to convert the S.S. Selma into a fishing pier, pleasure resort and oyster farm.

Plans to convert the pier never materialized. Though, tours frequently pass by the ship and casual boaters occasionally creep closer to the ship for a closer look.