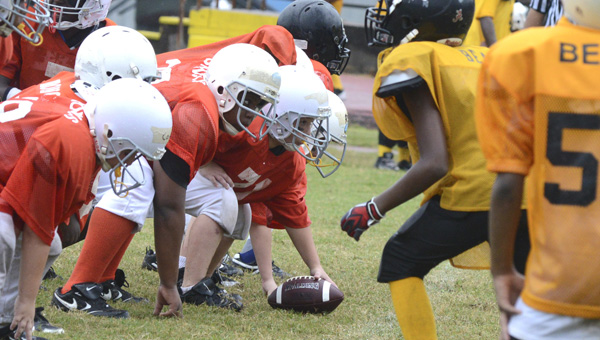 Registration for youth football season is off to a quick start, with over 30 players already signed up in three days. Terry Jackson, football director for the Selma Recreation Department, estimates a total of 650 players will sign up.–File Photo

Youth football registration started last week and is already off to a fast-paced start.

Over 30 players have signed up in the first three days of registration, which started last Thursday at the Selma Recreation Department office at Memorial Stadium and will continue for the next month.

“I think I will get more kids this year because we are starting off well so far,” said Terry Jackson, the football director for the recreation department.

Based on the early turnout, this could be a record-breaking year for football signups.

Jackson estimates that around 650 youth will participate with the city league this season, which would by far surpass last year’s total of around 500 players. — which was the most players that have ever taken part in the football league.

Jackson credits potentially three teams in Orrville this year, as well as having teams in other surrounding cities, as the main reason for the growth.

“This year, there is a strong possibility that I might have three teams in Orrville,” Jackson said.

With the city on the horizon and getting underway later this fall, coaches are starting to get excited. Roger Thompson, who has been coaching youth football for the city league for 25 years, said he loves this time of year because it signals that the season is right around the corner.

“I have so much adrenaline rushing through me that it is like I’m a kid myself,” Thompson said. “It reminds me of when I was a kid that age.”

Thompson is set to coach the Falcons this year, which will be made up of 10, 11 and 12-year-olds.

“The folks that work during the week need to take advantage of Saturday and bring the kids out,” Jackson said. “It is more convenient for us and them.”

All players, even if they played last year, must register and pay a $10 fee.

To register, players must bring their birth certificate, registration fee of $10, and have an adult sign their registration card.

To be eligible to play, players must be between ages 5-to-12 before May 1. The child must be present so that he can be weighed at the time of registration.

Any players who register after August 30 will be placed on a waiting list.