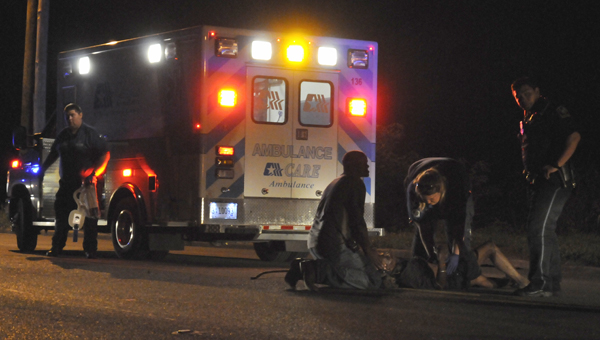 Emergency personnel help a man into an ambulance after he was struck by a car on Dallas Avenue. (Josh Bergeron | Times-Journal)

A man was hit by a car Wednesday night on Dallas Avenue, but was responsive and transported to Vaughan Regional Medical Center.

The incident occurred at about 8:30 p.m. just east of Bloch Park near Valley Creek Homes. Witnesses said the man was crossing the street when a car hit the man. The man, whose name was unknown at the time of the incident, was thrown in the air and landed on Dallas Avenue, witnesses said.

As emergency personnel loaded the man into an ambulance, he was moving and able to respond to questions.

The man was loaded onto a stretcher and into an ambulance before leaving the scene.

More information will be added as it becomes available.

By Scottie Brown The Selma Times-Journal   A Selma woman is behind bars on several charges after allegedly threatening the... read more