The frog prince hops on stage at the library Tuesday 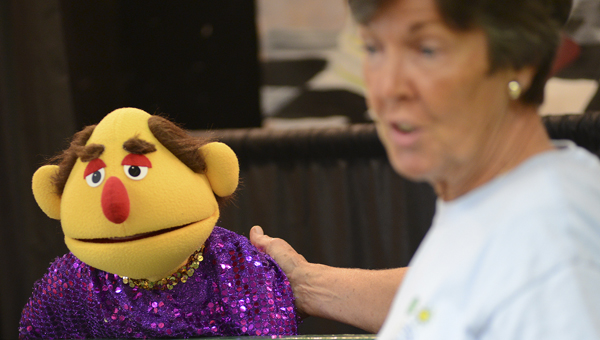 A cast of characters returned to the stage at the Selma-Dallas County Public Library Tuesday morning for a puppet production of The Frog Prince.

Library executive director Becky Nichols said the puppets have been a part of the library’s Sensational Selma Summer programming for decades.

“The puppets are a vital part of our programs down here,” Nichols said. “We have been doing the same nine classic shows for 30 years, and it is always a hit with the children when the curtain opens and the puppets pop up.”

Nichols said she believed the puppet shows are always a big hit with young audiences because they bring the stories to life.

“I think it’s theater,” Nichols said. “Its all about the sounds, lights and stories. For some children, this is their first interaction with the theater, and for many, it will be the only theater they see.”

Nichols said the well-attended event was just another big day at the library.

“This has been an amazing summer, and for me, it’s been so amazing because the programs have been so well-received by the community,” Nichols said. “We’ve had so many parents, teachers and children tell us how much they’ve enjoyed this summer. It’s really been nine weeks of fun.”

Selma resident Linda Tellier brought her two grandchildren with her to Tuesday’s puppet show, and she said the trio have become regulars at the library this summer.

“I wanted to bring them out here because they love reading and spending time at the library,” Tellier said. “It’s a huge help for us to have the event here throughout the summer, and I like how educational the events are.”

A complete list of events and event times can be found online at www.SelmaLibrary.org or in person at the library.