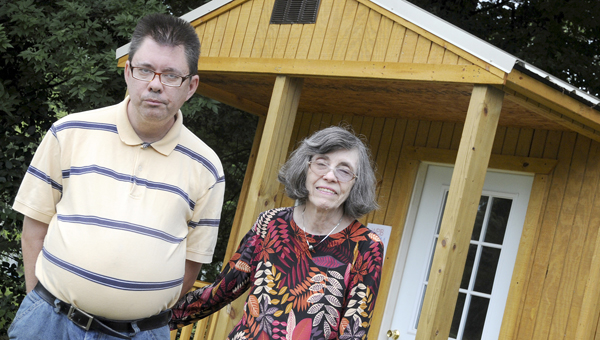 Selma resident Dan Presley, left, stands with his mother and supporter Patsy Presley, right, in front the station for WPJB 93.3 FM Jesus Radio. As the founder of the nonprofit Christian radio station, Dan said it will be completed between December 2014 and May 2015. (Sarah Robinson | Times-Journal)

Selma resident Dan Presley‘s 1991 experience on a Christian radio station led to a vision to build his own station. In less than a year, that dream is expected to become a reality.

Presley is making final preparations for WPJB-LP 93.3 FM, also known as Jesus Radio, which is scheduled to become operational between December and May. The nonprofit Christian radio station will play contemporary Christian to execute Presley’s mission to spread positivity in Selma.

“I feel that Selma has had need for this station for years, because of all the crime, violence and evil,” Presley said. “I want to help put a dent in some of that in Selma if I can.”

Created under the People for Jesus Radio Broadcasting Company, Jesus Radio station is located at 608 Park Avenue, off of Summerfield Road.

The broadcast area will be approximately within 12 miles of the 100-watt transmitter.

Presley wants the music to appeal to those ages 18 to 54.

“Those are the ones that still don’t have a gospel radio voice of their own,” Presley said. “I want to help bring a voice to Selma that will have a positive influence on them.”

He said he also wants to help create more job opportunities with the new station.

With a goal to raise $10,000 for operational costs, Presley’s hoping the community will provide some financial support.

Donations for the radio station can be mailed to 608 Park Avenue. Checks can be made payable to People for Jesus.

“Help is greatly appreciated, but regardless of whether you donate or not, you’ll be able to enjoy our broadcast with no on-air advertising,” Presley said.

The radio station has not been completed, but Presley has already earned a fan.

His mother, Patsy, said she loves Southern music, and she’s looking forward to praising God as a listener.

“We owe all this praise to the lord,” Patsy said.