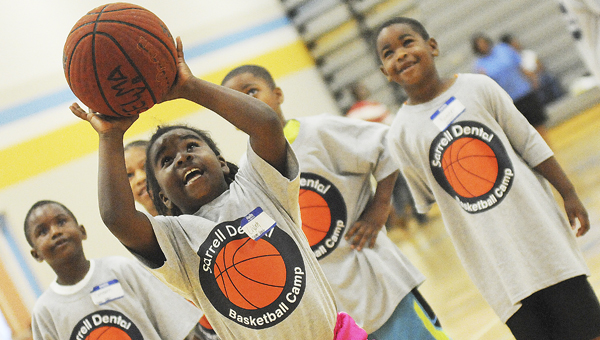 Liyah Herring, one of the campers at Sarrell Dental’s Basketball Camp Saturday at Selma High School, smiles as she gets ready to try to shoot the ball. Herring was among the 200 children that took part in the camp Saturday.–Daniel Evans

Sarrell Dental Center held its third annual basketball camp Saturday at Selma High School with the help of the University of Alabama and some local coaches.

The camp was free and gave youth a chance to learn directly from many of the Crimson Tide’s current and former basketball stars.

Former players Andrew Steele and Ben Eblen were also counselors at the camp, which always fills both of Selma High School’s two basketball gymnasiums with students.

“I think at the Selma camp the kids seem to be more excited,” Steele said. “I’m not too familiar with locally around Selma, but it seems to be a really, really big deal and all the kids, whether they are good at basketball, or they just wanted something different from what they normally do, are really excited.”

Sarrell hosts basketball camps in many other cities, including Alexander City and Anniston, but the Selma camp is traditonally the largest.

Around 200 campers took part in this year’s event, which is a little smaller than last year’s total.

The players who did participate got to get close to some of their favorite basketball stars, which is one of the highlights of the camp.

“It is a great opportunity for us to give back to the community that we serve andto  offer something to these kids that otherwise they might never get a chance to do and bring some of their idols for them to meet,” Summer Quinn, Director of Marketing and Community Outreach at Sarrell Dental Center, said.

Sarrell is a non-profit that treats the dental and optical needs of Alabama ages 1-20 and has 14 offices around the state.

Campers were divided into teams as counselors introduced them to individual drills.

Counselors at the camp stressed the importance of hard work and proper health habits.

“We always have the players talk to the kids about how it takes more than a little bit of effort to get where they have gotten,” Quinn said.

Morgan Academy’s Dana Bohannon talks to her team during the first day of volleyball practice. Bohannon is the Senators’ new... read more