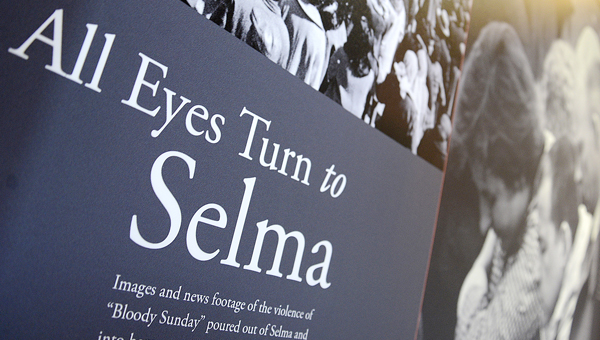 Permanent displays have been erected at the Selma Interpretive Center, providing a comprehensive understanding of Selma’s role in the civil rights movement of the 1960s. — Jay Sowers

The Selma to Montgomery National Historic Trail draws thousands of tourists to the Black Belt annually. The trail is also a part of a $27.9 million industry, according to a National Parks Service report released Friday.

The parks service report surveyed tourism spending in areas surrounding national parks. The report found that 749,855 people visited Alabama, spent $27.9 million and supported 396 jobs in the state. The report didn’t include specific figures for the Selma to Montgomery Trail, which includes the Lowndes Interpretive Center in White Hall and the Selma Interpretive Center at the corner of Broad Street and Water Avenue.

“It’s awfully hard to quantify how much of an effect the historic trail has on the local economy,” he said. “There are so many other things associated with civil rights history that may or may not have anything to do with the trail.”

Selma-Dallas County Tourism director Ashley Mason used the National Voting Rights Museum Rights Museum as one example of a tourism draw that’s not directly associated with the trail. She said approximately 45,000 people visited the museum in 2013.

A majority of tourism dollars — 30.3 percent — are funneled into lodging, according to the parks service report. Food and beverages were a close second at 27.3 percent.

The report only quantified spending statewide and nationwide. Ballard said tourism is a big industry in Dallas County, but not quite the largest contributor to the tax base.

“I personally would be reluctant to rank tourism as the number one contributor to the tax base, but I wouldn’t argue if someone could quantify it,” he said. “I think the number one resource that we can capitalize on is forest products.”

Across the U.S. and Alabama, the report found the 16-day government shutdown in October accounted for a significant decline in park visitation. Most national parks were closed during the shutdown resulting in a decline of 7.88 million visitors.

“Whether they are out for an afternoon, a school field trip, or a month-long vacation, visitors come to have a great experience, and end up spending a little money along the way,” Austin said.

Selma Police get ready to hand out school supplies

Thanks to the Selma Police Department, several parents will be able to prepare their children for the 2014-2015 school year... read more