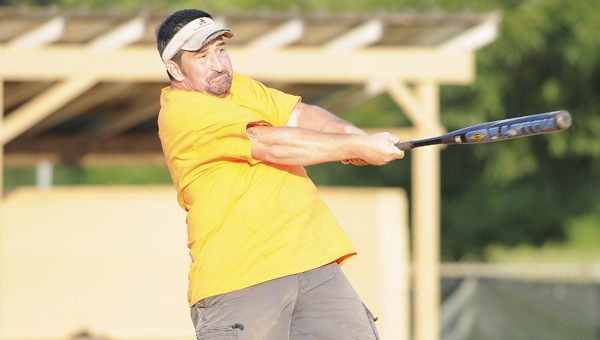 Greg Leight of the Alabama Teen Challenge hits an inside-the-park home run during Thursday night’s charity softball game against the UAB Scrubs, which was made up of doctors and faculty from UAB Selma Family Medicine. –Daniel Evans

Even if the scoreboard had read the opposite score at the end of the game, Teen Challenge was going to be the night’s big winner as the game’s beneficial charity.

Teen Challenge is a faith-based rehabilitation program that guides individuals in their fight to overcome addiction of all kinds.

“[The guys] really enjoy it because they see those doctors on a very regular basis when they get poison ivy or the flu, because most of them don’t have insurance, so they know the doctors by names,” Alabama Teen Challenge program director Jason Easter said.

UAB Family Medicine also does blood work for Teen Challenge participants at a reduced rate, since many in the program do not have insurance.

Easter said the crowd Thursday was as big, if not bigger, than it has been during the three years the softball game has been held.

“The community support is huge. We would never keep our doors open [without it],” Easter said. “…It is expensive. It is basically roughly $1400 a month per bed. There are a lot of folks in Selma that step up and take ownership. They will support a student for a year and this just gives them a chance to connect with them.”

Donations were taken and everything purchased from the concession stand went to help Teen Challenge, so the game allowed everyone to relax and have a good time.

UAB’s Karen Bailey and Brenda Dale wore pink tutus throughout the game so everyone would remember to take the result lightly and remember it was just a game.

Bailey scored the first run of the night for the UAB Scrubs, although by that point, the game was well out of hand.

Teen Challenge led 18-1 in the fourth inning and then held on as UAB made a late push to close the gap.