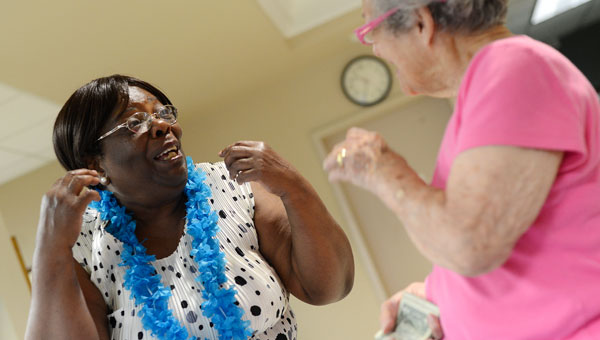 Betty Tucker has seen a lot in her life, except a reason to give up hope.

With that in mind, she wrote her first book, titled “Don’t Worry About the Mule Going Blind: Hazel’s Daughter,” which was released in 2013.

Tucker was at the Selma-Dallas County Public Library for two hours Monday morning, signing copies of her book and spending time with people who stopped to buy a copy.

“This is why I am here,” Tucker said. “It’s nice to sell books and travel around, but I just love meeting people. It gives them a chance to meet me and ask questions, and it gives me a chance to thank them for their support.”

Becky Nichols, executive director of the library, said the library makes a point to give authors from the Black Belt the opportunity to set up in the lobby, like Tucker did Monday.

“We like to spotlight local authors when we can,” Nichols said. “We can give them the lobby for free at a prime time, like now, because it gives them a chance to mingle with the community and teach the people that pass by about their books and their talents.”

Throughout the book, Tucker describes how she overcame countless personal trials and setbacks while growing up in Troy, Ala., and Belle Glade, Fla., in the turbulent years that made up the 1950s and 1960s.

Tucker said the process of writing the book proved to be therapeutic at times, as it allowed her to face the darkest moments of her past.

“When you are looking back at your life, it’s hard to go back and visit the dark times and the challenges and revisit those situations,” Tucker said. “It was tough for me at times, and I know it was tough for my developmental editor to talk about some of the things I’ve been through, as well.”

Tucker said it was a challenge to write about her memories in the book.

“I truly believe everybody has a book in them, but getting it on paper is far from easy,” Tucker said. “It’s work. I’ve written poems, and I have written a song. But this was the first time I have taken on a project this big. I learned that writing a book is a great task.”

Children in Meto line up for a meal during one of Integrity Worldwide’s previous mission trips. The group plans to... read more