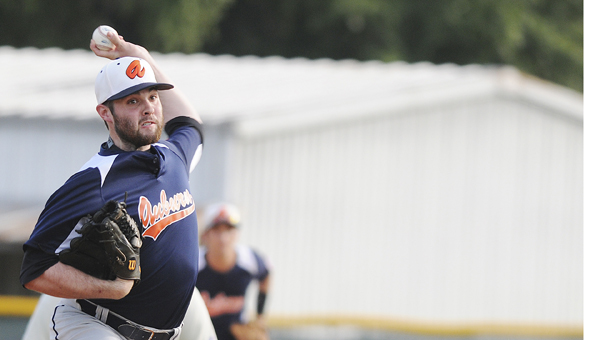 Auburn pitcher Zack Pope throws a pitch in his team’s 14-1 victory over Selma Thursday at Bloch Park. Auburn went on to win the tournament Sunday with a 3-2 victory over Tuscaloosa. Auburn will represent the stae in Ozark for the World Series starting Friday, July 18.

Auburn might have won the Dixie Majors state baseball tournament at Bloch Park Sunday, but the City of Selma was the big winner.

Fans from all over the state flocked to Bloch Park for the fifth consecutive year as the 17-19 year-olds battled for the state crown and a chance to participate in the World Series. Following Auburn’s 3-2 win over Tuscaloosa Sunday that clinched the state championship, everyone was still talking about how much they enjoyed their weekend in Selma.

“We have found it to be one of the most baseball friendly cities that we have tournaments at,” Dixie Baseball assistant state director Charles Alexander said. “The facilities are second to none and the people are gracious.”

But for tournament organizers, the best part of the weekend was the lack of rain, which prevented delays and kept everything on track.

“Normally, it rains a lot and that just about doubles your cost factor with the diamond dry and all the field preparation,” Selma Parks and Recreation Director Elton Reece said.

Good weather was especially important for this year’s tournament, because the schedule was adjusted this year as a means to speed things up. In past years, the tournament ended on Monday, but this year days three and four were combined and held on Saturday, which allowed the tournament to end Sunday.

Only two teams, Opp and Auburn, stayed in hotels in Selma during the tournament. The other six teams in the field drove to the park each day.

“Everybody has been really nice to us and everybody seems to really love the game of baseball here,” Tuscaloosa coach David Branham said. All the fans have been into it and have shown great sportsmanship.”

Reece said the Dixie Majors are the least attended age group in Dixie Baseball, and that this year’s crowd — which didn’t fill Bloch Park on any single day — was comparable to previous years.

Reece said there are several factors he would say contribute to low turnout for the Dixie Major games, including 17-19-year-old players being old enough to drive themselves or find their own way to the game and fans not getting into it the way they do for younger age groups.

However, that doesn’t mean the fans that do travel to attend the games aren’t helping the city prosper, Reece said.

“People are going to spend money while they are here whether they do it at the concession stand or at Jacks or Hardees or somewhere else,” Reece said.

“As far as we are concerned, as long as Selma allows us to come, we will be here,” Alexander said.

The Dallas-Wilcox Bama Club is raffling off a set of Alabama home game season tickets in August. A total of... read more