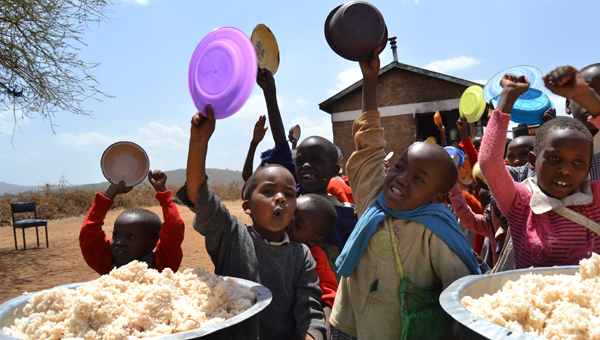 Children in Meto line up for a meal during one of Integrity Worldwide’s previous mission trips. The group plans to expand its reach into a neighboring village during this year’s trip, which will include the youngest group of volunteers in the organization’s history. (File Photo | Times-Journal)

Editor’s note: This article has been ammended from a previous version to state the correct spelling of Alan Hicks’ name.

With eight years and several mission trips under its belt, a Selma-based non-profit organization is beginning to extend its reach in southern Kenya.

Integrity Worldwide has largely focused its attention on Meto, Kenya. Some of its work in the small village to date includes building a well, feeding programs, medical clinics and helping to pay the cost of higher education for the village’s Maasai people.

“I think one thing that makes integrity stand out is that it’s not about trying to change the culture,” said Janet Atchison, who has traveled to Kenya with Integrity on five different trips. “We’re very aware of the culture and how important it is to them. The important thing is empowering the community to grow.”

Since Atchison’s first trip to Kenya, she said changes are already visible.

“The community has just grown significantly,” she said. “They have their own small businesses, a library and the children are eating better.”

On July 29, a group of eight Integrity Worldwide volunteers plan to travel to Meto again. Though, this time, the primary focus is on building a water well in another small village — just over 10 miles away from Meto.

The team plans to set up a tent for medical relief at the site of the new well and provide Christian ministry.

This year’s group of Integrity travelers includes: Ellen Taylor, a recent graduate of Auburn University’s nursing school; Clint Mitchell, a civil engineer and recent graduate from the University of Alabama; Kyle Stewart, an agriculture-economics student at Auburn; Maggie Tipton, a student a Meadowview Christian; Christy Holding, a counselor in Montgomery; and Atchison.  Alan and Averee Hicks also plan to travel with the group.

Tipton, 15, said it would be her first time traveling to a foreign country.

“I guess I just prayed about it and it got stuck in my mind,” she said. “I’m excited about it. It’s going to be a completely different environment.”

Atchison, who is a retired nurse, said she is most excited to return and rekindle the bond formed with residents of Meto.

“We have an excellent rapport with the people,” she said. “It’s almost like a family.”

Integrity also has long-range plans for the region.

Alan Hicks said Integrity recently acquired three acres in Meto and plans to use the land to build a medical clinic. Integrity is still in the midst of raising money for the clinic, but could staff it with a Meto native when the clinic is finally finished.

Alan Hicks said Integrity is sponsoring a student at the University of Nairobi that is pursuing a medical career. Not only is it the first time any Maasai have attended a university, but Allen Hicks said the student also plans to return to practice in Meto.