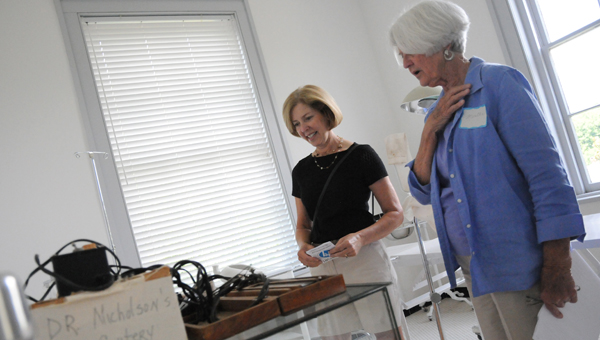 With a catchy program name and pamphlets including a list of historical sites, tourists and local residents traveled around the city and back in time Saturday.

It didn’t matter where visitors started, as all sites stayed open from 10 a.m. to 4 p.m.  and it seemed each tourist found a different, interesting aspect of history at each site.

“It’s just been a great experience,” Sirk said. “I thought the third floor was itneresting because it shows how hospitals were.”

Montgomery resident Carla Williams and her children started their seven museum tour at the Old Depot Museum. Williams said she traveled to Selma specifically to go on the museum tours.

Williams was most excited about the list of patients treated for various injuries on Bloody Sunday. The list is located in the Old Depot Museum.

“I had never even considered that people needed to receive mediccal care after Bloody Sunday,” she said. “I have been to Selma, but I wanted to get my kids to come and learn about history.”

Selma resident Casey Smith also talked about the value of learning about the area’s history.

“When I moved here there were a lot of things that I thought about Bloody Sunday that I learned weren’t true,” Smith said. “For example, when I first moved here, I thought Martin Luther King was on the bridge on Bloody Sunday.”

Old Depot Director Beth Spivey also talked about the emergency room list for Bloody Sunday, which she considers the best piece in the museum. When Spivey first took over in 2013, the list was hidden.

“No where in history do you know who got hurt that day, because it’s been here,” she said.

Halfway through the day, Andrea Cross took a break from helping guide visitors through the Vaughan-Smitherman Museum to talk about the value of the tours.

“I think sometimes we take for granted the things that are present all around us,” Cross said. “We travel the same paths to school, home, or work and never take the time to explore our own history.”

As the tour drew to a close and visitors gathered at the Old Depot for a gift basket drawing. And, if the Old Depot’s attendance numbers are indicative of the seven-on-seven tour’s participation, then another, similar museum tour may not be far off.

“I had more people come through today than I did all of last week,” Spivey said.