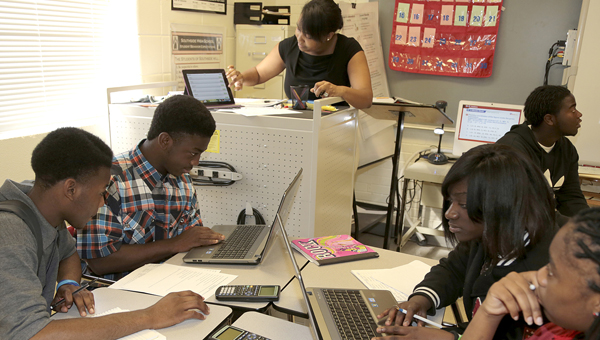 Students at Southside High School take advantage of the One-to-One progam by using laptops during their math class.

Dallas County School System’s two-year journey to bring wireless Internet access to all of its occupied buildings has finally come to an end.

This fall, all 11 schools within the Dallas County School System will have wireless Internet access, and several of the schools will have the ability to participate in the One-to-One program.

Dallas County Superintendent of Education Don Willingham said the system was excited about this accomplishment.

“It’s a wonderful opportunity for our students,” Willingham said. “It’s an opportunity the kids in our area don’t easily get.”

Terry Grissom, technology coordinator for the Dallas County School System, said the move to wireless capabilities in the school system was a means for them to try and keep up with the times.

“It’s a whole different world in education from where it was 20, 10 or even five years ago,” Grissom said. “Students today are so used to portable technology, whether it’s phones, or iPads or laptops. We’ve seen that our schools have to integrate that technology and use what’s available in order to enrich classroom learning. There are so many great resources out there available for students, to just research and learn and advance their learning abilities that we just had to get on board with it.”

The One-to-One initiative gives students the opportunity to use iPads and laptops during a school day. Every student at Brantley Elementary and Southside High School are currently able to check out an iPad specifically assigned to them each day.

While some schools, such as Dallas County High School or Keith High School, are still progressing toward fully implementing the program, Tanya Miles, the school system’s transformation specialist, said none of it would have been possible without the $3 million Student Improvement Grant the school system received to use over the past three years.

“We were lucky enough to get a little extra in the beginning,” Miles said. “At [Brantley and Southside] we were able to implement the One-to-One initiative with the students. Every student at Southside High School as well as at Brantley, they have access to an iPad.”

While teachers have been able to take advantage of the One-to-One program by supplementing their lessons with different learning resources on the iPads and laptops, Willingham stressed the iPads were not to take place of textbooks.

Parents should not worry about students getting distracted in class while using the iPads. Grissom said the Internet had filters and blocks in place for websites the school system deemed inappropriate.

“There’s actually some responsibilities that are upon us as we do this,” Grissom said. “We do get some federal money to help with out Internet connectivity, and as a part of that we have a policy in place. We have a filter in place on our network that restricts access to sites that have been flagged as inappropriate to minors.”

For Willingham, he said this accomplishment was a milestone for the Dallas County School System.

Sandra Glover, the owner of Steak Pit on Highland Avenue, is hoping the restaurant’s 14-ounce rib-eye steak will be nominated... read more