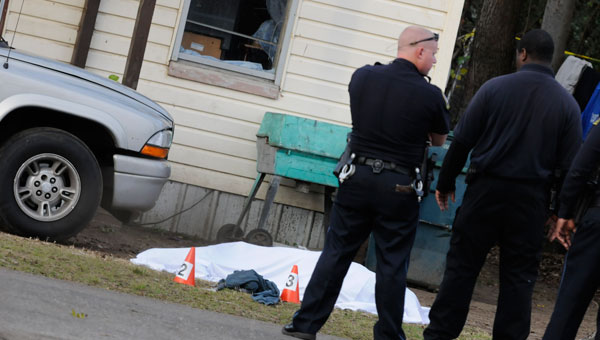 Police stand over the the body of Ananias Shaw following a December officer-involved shooting. Shaw was pronounced dead on the scene. A grand jury decided last week that the officer acted correctly during the incident. (Josh Bergeron | Times-Journal)

A Dallas County grand jury has found an officer with the Selma Police Department acted properly in an officer-related shooting in December.

District Attorney Michael Jackson said the grand jury released their findings last week after reviewing the results of an investigation by the Alabama Bureau of investigation.

Selma Chief of Police William Riley said the grand jury’s decision to no bill the case means the officer acted correctly when confronted by a hatchet wielding man in December. The shooting resulted in the death of 73-year-old Ananias Shaw.

“It shows that our officers are operating the way they are trained,” Riley said about the grand jury decision. “The officer simply fired one round to stop the threat.”

The incident occurred on Dec. 4, 2013 when the officer shot and killed Shaw, who wielded a hatchet, on Griffin Avenue after responding to a disturbance call.

Riley said police were called to Church’s Chicken on Broad Street, but found Shaw in an abandoned building at the intersection of Washington Street and Griffin Avenue.

Officers tried to get Shaw to drop the weapon multiple times, but Shaw refused and allegedly charged one of the officers, Riley said. The officer in question fired one round and Shaw dropped to the ground, dying shortly after.

Riley declined Thursday to provide the name of the officer, saying he preferred to protect the officer’s identity.

The investigation matched up with the Selma Police Department’s account of the incident and did not reveal any new information, Riley said.

“Taking another human being’s life is something that’s very traumatic,” Riley said. “When these things are set in motion, it has a cascading effect for all involved.”

The officer-involved shooting resulted in more than an ABI investigation. Only one week after the shooting, the Selma City Council approved the purchase of 27 stun guns and a non-lethal shotgun for the department.

“I’ve never met a police officer that intentionally wanted to take a life,” he said. “As technology grows, more and more options come on the market to not use deadly force.”

Riley said the unidentified officer remained on administrative leave until last week, shortly after the grand jury’s decision. The officer is now back on full duty.