Auburn lights up Selma in each team’s state tournament opener 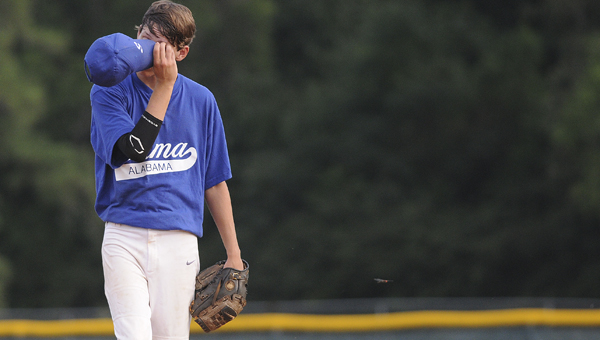 Going into the opening day of the Dixie Majors state baseball tournament, Selma head coach Johnny Raybon wasn’t sure any team in the field should have been considered the favorite.

A frontrunner might have emerged Thursday night, as Auburn hit the ball around the field at Bloch Park in a dominant 14-1 victory over Selma that left the host team spiraling.

Selma used four pitchers — Alex Davis, Carstella Hayes, Trey Powe and Joey Raybon against the Auburn lineup, but none of them had much success.

Auburn scored seven runs in a decisive second inning that saw the visitors take command of the game and never look back.

De’Mikyle Holmes singled to score Will Eiland and Daniel Danley to give Auburn a 4-1 lead in the second, but that was just the start of a big offensive night for Auburn.

Jesse Coleman singled to center field to add another run, and two batters later a double by Dake Rivers scored a run. Ashley Campbell added another point on a passed ball to make it 7-1.

Nothing could slow Auburn down.

After roughing up Davis and Powe, Auburn took its turn putting up runs on Hayes, who lasted only a handful of batters before getting pulled.

Danley welcomed Hayes to the game with a double that scored Jesse Coleman, upping Auburn’s lead to 12-1 in the fifth. After allowing two more hits and a walk, Hayes was pulled in favor of Joey Raybon, who gave up the last two runs of the game.

“It’s been like that for us the whole season,” Auburn coach Joey Weaver said of his team’s offensive display. “We hit the ball pretty well. We’ve had a couple of scrimmage games that helped us because we faced some college pitching to get us on the way to hitting.”

Weaver said he stressed to his players the importance of the first game of the tournament and was proud of how they performed.

Selma will play Tuscaloosa at 12:30 p.m. Friday in an elimination game. Auburn will have a much easier path to the championship and will face Greenville Friday at 5:30 p.m.

In other games Friday, Opp rallied from a 2-0 deficit to defeat East Montgomery 3-2 in eight innings on a walkoff home run. Bellingrath defeated Prattville 12-0 in the opening game of the day.

Opp and Bellingrath will play at 3 p.m. Friday. Prattville and East Montgomery will play an elimination game at 10 a.m.