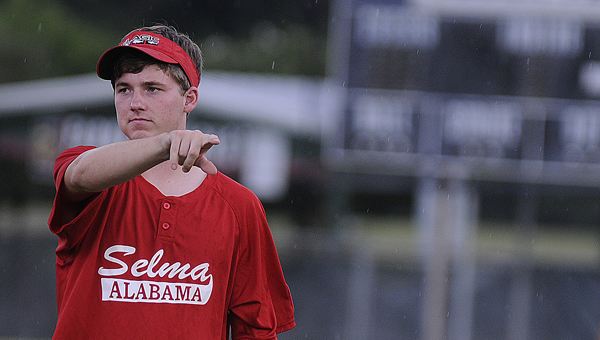 Selma catcher Cameron Smith points to a teammate during Thursday night’s practice at Bloch Park. Smith and the Selma All-Stars will face Auburn at 5 p.m. Friday in the first round of the Dixie Majors state tournament. The tournament will kick off with a game between Prattville and Bellingrath at 10 a.m. Thursday.–Daniel Evans

Bloch Park will be full of some of Alabama’s best youth baseball players Thursday when the Dixie Majors state baseball tournament gets underway.

Selma has never won a Dixie Majors state baseball title, but this year’s group of All-Stars hopes to change that when they kick off their championship campaign Thursday night versus Auburn at 5:30 p.m.

Johnny Raybon, head coach of Selma’s Dixie Majors, said he thinks his team is ready and good enough to seriously challenge for this year’s title.

The eight-team state tournament will start at 10 a.m. with a game between Prattville and Bellingrath. East Montgomery will face Opp at 12:30 p.m. and Tuscaloosa will face Greenville at 3 p.m.

The tournament is double elimination and will run through Sunday with a championship game scheduled to start at 10 a.m. that day.

Raybon said his team’s first game versus Auburn is important, but since the tournament is double elimination, a defeat would not be the end of the world.

“You always want to win that first one, but I’ve won state tournaments where we lost that first game,” Raybon said. “If they go out and play to their capabilities then they are more than capable of winning the state… We have the talent and the players that we should do well.”

Raybon said teams change from year to year as players and coaches move on, especially in the 17-19 age group that Dixie Majors covers, so it’s hard to say which teams should be considered favorites. Tuscaloosa is the only team in the field that Selma has faced this year, but that game came in a meaningless district tournament where every team was set to advance.

Opp, as the defending champions, is expected to be one of the stronger teams in this year’s field.  Selma played Opp in its opening game last season in a 12-inning thriller, but came up on the losing end.

A football player and cheerleader are going to be on the cover of the 2014 Gridiron football magazine, but which... read more