In addition to receiving a small salary each year, the Dallas County Commission uses thousands in taxpayer dollars for travel-related expenses.

In the 2014 fiscal year, the largest budgeted travel expense was mileage reimbursement for use of personal vehicles at $15,000. As of June 16, the commission spent a combined $10,964.99, according to finance documents. Other, smaller travel budgets include airfare, lodging, conference fees and incidentals. Conference fees were the second largest travel expense as of June 16, according to finance documents.

Mileage and other travel expenditures are budgeted as one combined amount rather than individual accounts for each commissioner, according to finance documents.

District 4 commissioner Larry Nickles said his expenses are largely composed of driving throughout the county to survey potential problems or respond to constituent calls. 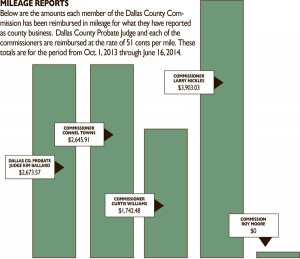 “If you name it, then we get calls for it,” Nickles said. “I try to ride each and every road in my district at least once per month. I try to be a commissioner for the people, representing everyone from the man at the end of the road to the man in the subdivision.”

Most of the problems in District 4 relate to road problems, downed trees and various infrastructure issues.

Nickles district stretches from downtown Selma to the western edge of Dallas County. He also received the greatest amount in mileage reimbursement — $3,903.03 — according to county finance documents.

Nickels said the expenses are representative of an original campaign promise to actively ride through his district.

“I can’t do my job if I am not out there working,” he said. “I feel like I can save the county a lot of money in the long run. I try to prepare our county employees for the problem and what equipment they need to take with them.”

Moore said he doesn’t plan to file for mileage this year. Instead, he plans to pay for any county-related expenses out of his own, personal finances.

“I used to keep up with mileage when I first got on the commission, but I’ve gotten to the point now where I just pay for it out of my own pocket,” he said. “I think that county officials make enough as far as I’m concerned.”

Reimbursements aren’t itemized by trips, but rather listed by month on finance documents.

Harrell said it’s fairly easy to scrutinize conference fees, airfare and lodging to ensure expenses are county related. She said there isn’t a set procedure for ensuring all mileage is county related.

“As far as checking the roads, it’s usually coordinated with [county engineer] Coosa [Jones],” she said. “When going to meet someone, they usually tell me.”

Ballard said there’s a fine line when determining county business and he often prefers to not file for reimbursement for small trips.

“I drive 50 to 60 miles to and from work and I could claim that, but I don’t think it’s claimable,” he said. “It’s got to truly be county business. Anything that you wouldn’t have done otherwise except for the fact that you are a commissioner or the probate judge is justifiable.”

The county’s travel budget functions differently than the Selma City Council. Each city council member is allocated $2,500 per year for all travel expenses. After exceeding travel expenditures, council members are allowed to use discretionary funding to pay for overages.

If a commissioner retires or loses an election, Dear said the new commissioner would receive the previous office holder’s county vehicle.