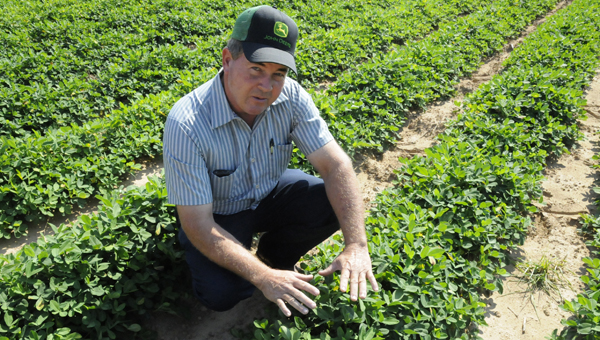 Owen Yoder, the winner of the 2014 Southeast Peanut Profitability Award, explains what it takes to be profitable when growing peanuts.–Scottie Brown

Owen Yoder, an Orrville native, was named the winner of the Southeast Peanut Profitability Award for 2014.

Yoder, who has been farming peanuts for about three years, said it was an honor to win the award.

“It’s an accomplishment to me to be able to win the award,” Yoder said.  “I knew I had a good year last year, and I waited until the last minute to send in the paperwork. I can’t say that I really felt like I would win it. You know, for four states, I’m like a little flea on a big ball. I didn’t really think my odds of winning would be great.”

For the Southeast region, Yoder said he was considered a small farmer growing only 150 acres, but Yoder was able to produce almost 5,600 pounds of peanuts, about 1,100 pounds higher than the average. Yoder said much of his success came from sticking to a plan.

Yoder’s crop last year was also graded at 78 percent, 6 percent higher than the benchmark. Because of the grade for his crop, Yoder was able to receive a higher-than-average price for his peanuts.

“A lot of times when you have a high yield, your grades will be good too,” Yoder said. “The 72 is a standard, but if you have less than the 72 grade, then you’re going to get less than the established price.”

While having a good crop is necessary for winning the Profitability award, an equally important component to the award was how well a farmer handled their overhead costs, or the operational costs for a business. A way Yoder balanced his overhead costs and profitability was by using previously owned equipment.

“My cost of maintaining equipment is going to be a little greater, but I don’t have the cost of making payments on it,” Yoder said. “Usually, when I buy a piece of equipment, I generally pay for it out of pocket for it, and then, like my harvester that I harvest with, I go through it every year and any parts I see may give problems through the harvest season, I’ll replace. Whether it’s barring teeth or fingers, or whatever it is.”

Peanuts, like any other crop, live and die by the amount of water they receive in a growing season. Yoder, who does not irrigate his crops, said the rain was timed perfectly last growing season.

“The rain fall that we received was very timely,” Yoder said. “I think you could say it was probably close to having irrigation. It just seemed like every time we needed rain, we got it, which is unusual for these parts. It was almost a perfect year.”

While Yoder is still unsure if he will apply for the Profitability Award again this year, he said he would consider it if his crop had an exceptional yield.

“If I have another good crop like I had last year, a good yield and all, possibly I will,” Yoder said. “If I have an exceptional yield again this year probably so, but my gut feeling is this is something I look at as a once-in-a-lifetime thing that happens.”