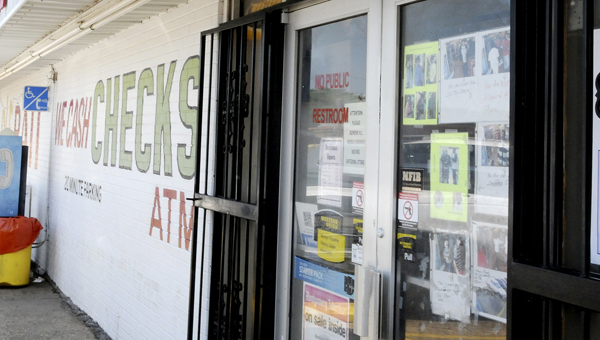 One of the Selma Curb Market’s doors, the door of shame, is filled with thieves or people who have been banned from the store. Manager Shannon Ethridge said he started the wall of shame about two years ago. (Josh Bergeron | Times-Journal)

The Selma Curb Market regularly recognizes local residents by plastering his or her face on the store’s front door.

Though, the honor’s actual prestige is questionable.

Colloquially called the “door of shame,” the collage of pictures includes faces of more than a dozen customers — now permanently banned from the store. Many of the pictures are accompanied by the phrase “you are not allowed in this store.”

The pictures are usually placed on the door after Etheridge reviews security footage rather than being caught in the act, he said.

In a few cases, Etheridge said the customer returned, apologized for the wrongdoing and asked to be allowed in the store. He said a mother once returned with her child, apologized and forced her child to pay for the stolen item. In the two years, Etheridge said a few pictures have been removed for various reasons, including death or an apology.

But in one case, a friend of a banned customer decided the door of shame wasn’t a fitting honor.

A theft doesn’t automatically qualify a customer for the door of shame. Etheridge said he often warns children not to steal, if possible.

“I do it just to make people think twice before they do anything,” he said. “I’m not trying to embarrass anyone. In the past, we would ban people and we wouldn’t know who they were and would come back in anyway. “

Another anti-theft measure, located in the store’s fishing section, is a sign that reads “Would Jesus steal worms?”

The Selma Curb Market is located on U.S. 80 near the Edmund Pettus Bridge.