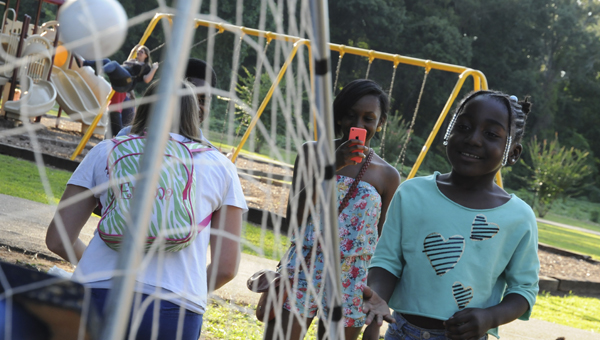 VALLEY GRANDE — Fun was to be had on almost every inch of Valley Grande City Park Friday as residents filled up the area to enjoy the city’s Fourth of July event.

For the ninth year, the City of Valley Grande hosted their Independence Day celebration. The park was laced with games, inflatable bounce houses, a water slide food vendors and more.

“We have fun, and we celebrate our independence,” Valley Grande Mayor Wayne Labbe said. “I think sometimes in America, we take our freedom for granted and we shouldn’t.”

Valley Grande residents Kenneth Martin and Donna and Donna Downs, who help organize the Fourth of July event every year, said they were excited to see more than a hundred people come out and participate.

In January, the two began mapping out the day’s festivities, adding a water slide, watermelon seed spitting contest and more to the event.

Downs said they pull their ideas from the other Fourth of July events, popular social network, other people willing to give their input.

Residents even have a chance to submerge some of the city’s most well known leaders in a dunk tank full of water.

The event concluded with a firework show at 9 p.m., which Downs said tends to attract even more crowds of people.

As much hard work as they put in each year arranging the event, Downs and Martin agreed that it is all worth it to see the community public benefit from the result.

Downs said that while most of the activities are geared toward the young children, many of the adults tend to love them also.

“To me, seeing the kids faces out here smiling is wonderful,” Downs said.

Labbe said the city wants to entertain the community while reminding them that Independence Day is about recognizing the freedom America has been blessed with after several people risked their lives to obtain it.

“We don’t want to lost sight of what Independence Day is,” Labbe said.