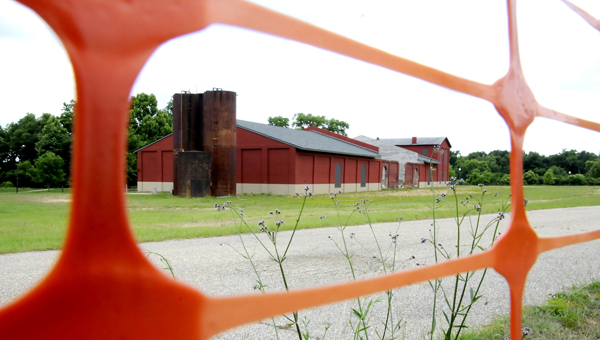 Despite a lack of recent construction activity, city leaders and architects expect the riverfront amphitheater project to be completed by December 2014. Selma Mayor George Evans said the completed riverfront park will have a significant impact on downtown Selma’s development.–File Photo

A funding conflict between two infrastructure projects may cause Selma to take out a $4 million loan that could have been partially avoided.

The city is nearing final approval on a $4 million loan from the Alabama Department of Environmental Management for a project that would replace nine miles of sewer lines throughout the city, but some council members question whether the loan is an unnecessary burden.

Taking out a loan may be the only solution to the city’s aging sewer lines. Selma Mayor George Evans said the city is unable to apply for grants to ease the project’s overall cost because of an unspent $250,000 grant with the Alabama Department of Economic and Community Affairs.

The $250,000 is classified as a community development block grant and is budgeted for a Riverfront Amphitheater project that began in 2012. The proposed amphitheater site is adjacent to downtown and months away from completion.

ADECA spokesman Jim Plott said an outstanding community development block grant would usually prevent the city from obtaining a grant of the same type, but cases vary according to the situation.

“A lot of times we would like the project to be further along,” Plott said.

The city could also apply for a grant through ADEM. Though, ADEM spokesman Scott Hughes said ADEM doesn’t offer grant amounts that would equal Selma’s needed amount for nine miles of sewer lines.

“The only thing ever close to that was the American Recovery and Reinvestment Act,” Hughes said. “If a city had a shovel-ready project, we were able to forgive a certain amount, but that was a one-time deal.”

Is the Sewage project worth debt?

Ward 7 councilwoman Bennie Ruth Crenshaw referred to a $12 million bond issue, approved in October 2009, as one reason the city should avoid additional debt. The city is still making payments on the bond issue. About half a million dollars remains unspent and unallocated as of April 1.

“How much debt would we really be in?” Crenshaw asked. “The city has never borrowed money like this. We can’t borrow our way out of debt.”

Ward 1 councilman Cecil Williamson said debt should be avoided, but the sewer loan would provide much-needed repairs to the city’s aging infrastructure.

“It will cost us more in the long run if we do not do it,” Williamson said. “We have got to do something to help with all of the cave-ins. I believe that the city will have enough money to pay off the loan.”

Estimates from city engineering consultant Ray Hogg said the city currently pays approximately $360,000 per year for various sewer line collapses. If the loan is approved, the city would pay $240,000 per year for 20 years, according to Evans.

Evans said he would be in favor of borrowing the $4 million, partially because the loan comes with a low, 2 percent interest rate.

“We can either do it now and pay for it, or do it later and pay for it,” Evans said. “At the end of the day, it’s something that has to be done, unless we are willing to let the conditions get worse throughout the city. We won’t get money like that anywhere else and that long of a time to pay for it.”

He said once the loan became available, the city began the application process. Evans said the loan rarely comes up and the city should take advantage of it while it can.

When will the river project be complete?

ADECA awarded Selma with the $250,000 grant in 2011. At the time, Davis Architects, with offices in Birmingham and Atlanta, was in charge of designing and coordinating contracts.

City officials held a ceremony in August 2012, signifying the start of construction. By June 2013, the building looked entirely different, with a new roof and redesigned front.

Construction ground to a halt shortly after. An error in bid documents forced major portions of the final phase to be rebid.

Eventually, the Selma City Council dropped Davis Architects and hired a new firm — Harris and Smith. The firm is based in Atlanta.

Evans said he proposed the switch because Harris and Smith offered to complete the project for significantly less. Progress was also moving slowly, meaning the city could have lost its $250,000 in grant funding from ADECA, Evans said.

The switch allowed the city to keep its grant funding and finish the project in time for the 50th anniversary of Bloody Sunday, he said.

“It’s just something that should have been completed already anyway,” Evans said. “We just weren’t going to be able to do it based on [Davis Architects] numbers. As a result of that, we decided to go with someone else.”

The amphitheater is currently in the bidding process for the final stage of construction, Evans said. The city’s approved contract with Harris and Smith projects a December 2014 completion date.

Evans said a completed amphitheater would boost the quality of life in downtown Selma significantly.

“It’s a means of downtown entertainment,” he said. “It creates an atmosphere that invites people to come out and have all types of events, gospel, musical or shows. To me, Water Avenue is our potential entertainment district like other cities have.”

If loan is approved, when will the sewer project be complete?

“Most of the time, citizens do not object,” he said. “It’s been a very successful program.”

Official approval or denial from ADEM is expected in August or September Hogg said in a previous interview with the Times-Journal.

Both Evans and Hogg expressed confidence Selma would be approved for the loan through ADEM. With ADEM’s approval, the next step would be council approval, Evans said.

The project would mostly focus west of Broad Street, including rehabilitating a concentrated group of sewer lines near Concordia College Alabama and a long string of sewer line near Valley Creek, according to city documents. Other planned areas are scattered throughout the city.