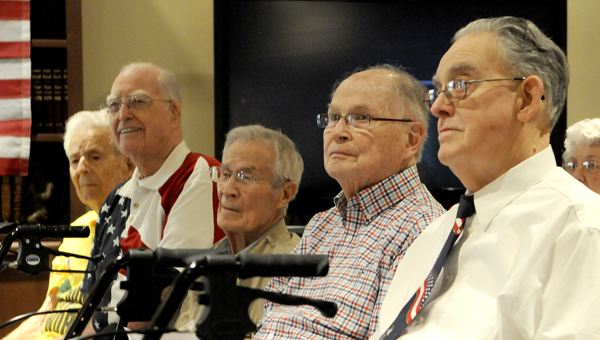 Five of the six veterans honored were present to receive plaques and pins from executives and volunteers from Asera Care Hospice.

Along with the pinning ceremony, the large crowd of friends and family gathered in the Cedar Hill lobby enjoyed music, a meal and bingo.

Bill Sellier, a 97-year-old US Army veteran, said the event was a kind gesture from the community.

“It’s certainly nice, by all means,” Sellier said. “We make friends out here with all these people.”

Cedar Hill administrator Trease Dawson said the Independence Day celebration is an annual event with a long history of bringing people together.

“We’ve been doing this event since 1997 when we first opened,” Dawson said. “It’s for the residents, their families and their sponsors, so it’s just a time for us to get together and celebrate Independence Day. It’s always a good time.”

Sheila Kendall, director of clinical services for Asera Care Hospice, said the pinning ceremony was a way to recognize the sacrifices of local veterans, and Asera Care Hospice hopes to connect those who have served and have common experiences.

“We have trained veterans to work with other veterans, and we have an umbrella under Asera Care that will minister directly to veterans,” Kendall said. “We want to come out to the community and let them know we appreciate them for the price that they paid for us to live in a free country. They have served, so now it is our turn to serve them.”