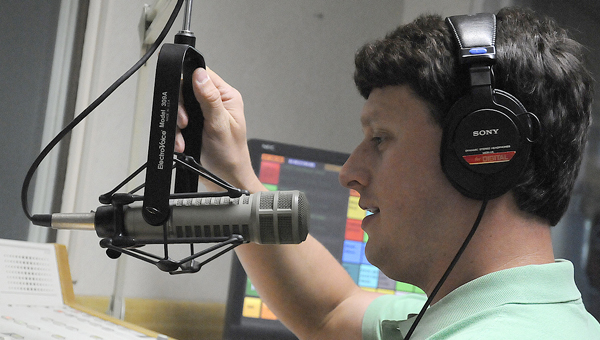 “Son if you can do business in Selma, you can do it anywhere,” Alexander recalled the man saying.

Alexander, now the President of the Scott Communications radio group, took it as a challenge.

Following graduation, Alexander began working at his family’s radio company, which included 100.5 WALX, but it certainly wasn’t his first time working at the station. He learned some of the smaller jobs at the radio station before high school graduation, and in college, Alexander hosted his own radio show.

“In my junior year at Auburn, I would take Tuesday and Thursday off and come to Selma for my radio show,” he said. “I would record it like it was live, and it aired the next day.”

Alexander recalled graduating from Auburn near the end of a week, taking the weekend off and starting at Scott Communications on Monday. Alexander’s initial responsibilities were to sell ads for the company’s radio stations, but his first task was actually to re-paint and organize his grandmother’s former office, which soon became his own.

Alexander said he was grateful to be treated like a beginner when he started, not receiving any preferential treatment because his father, Scott Alexander, ran the station.

“I was treated like the low man on the totem pole and had to pave my own way,” he said. “I was definitely kicked in my jaw a few times on the sales street.”

Alexander advanced upward and eventually was promoted to vice president of the broadcasting company, which included multiple different format radio stations. He was recently promoted to president and is essentially in charge of the company. Though, his father still sticks around for help.

One of Alexander’s recent efforts is HD radio channels for his company’s stations.

“We like to say there’s no static, no hiss, just the radio,” he said. “We are one of the smallest in the country that have HD radio. It’s still mostly in big cities.”

He says that an increase in different forms of entertainment, chiefly internet, has changed radio listener numbers, but Alexander remains confident that radio is a thriving communication method.

“Even here in Selma there is more room to grow,” he said. “The biggest challenge is variety and that people have more choices for entertainment and information. To deliver a viable product, you have to give people a reason to listen.”

Torrie Bond When Torrie Bond graduated from Dallas County High School in 1995, she didn’t plan on coming back to... read more