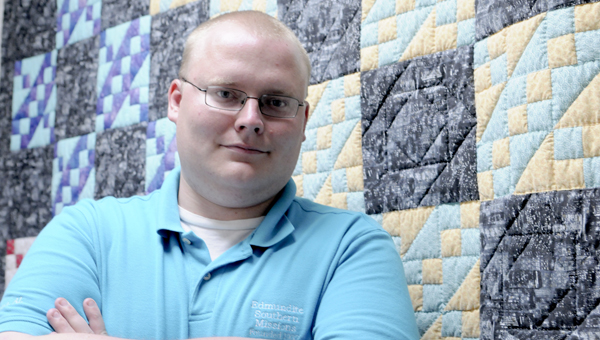 After being raised to be caring and giving to those around him, Selma resident Joe O’Quinn said his position at the Edmundite Missions is naturally a perfect fit for him.

As the assistant director of mission advancement and manager of strategic initiatives since 2013, O’Quinn holds the responsibility to oversee outreach projects in four counties, including Dallas County. The 27-year-old Maylene native said the satisfaction of knowing he is helping improve the lifestyle of thousands of low-income individuals each day leaves him feeling great.

“There are a lot of people that are struggling. You look at an organization like the Edmundite Missions that has been here for 77 years and constantly finding ways to provide the type of services and assistance those people need, not only to make it from day to day, but to also break the cycle of poverty,” O’Quinn said. “For me and for my service experience that I had, this just seemed like the perfect place to be to not only add to the organization, but to be able to be a part of a cause that I really believe in.”

In 2008, O’Quinn graduated from Troy University with a bachelor’s in public administration. It was his time at Troy as a member of Tau Kappa Epsilon that expanded his childhood desire to help others.

O’Quinn remembers the great feeling he would get from supporting charity organizations, like Ronald Reagan Alzheimer’s Foundation and St. Jude Children’s Hospital. After getting a taste of what it felt like to commit his time to helping others, O’Quinn began to join other groups to benefit the unfortunate.

From 2009 to 2011, O’Quinn was employed at the Corporation of National and Community Service, working for eight different nonprofit organizations.

“Then I got to see organizations whose purposes were to help and really learn then and hone what kind of organization that I wanted to be a part of and make my career,” O’Quinn said. “That’s what really what helped me to decide to come to an organization like the Edmundite.”

O’Quinn smiled as he thought back to a time when his organization was able to supply beds to a low-income Selma family with eight children who could only afford to rely on sacks of laundry as places to lay their heads at night.

“The look in these kids’ eyes … They had never gotten anything like that before in their lives. They were so excited,” O’Quinn said. “We could barely get them put together before those kids were jumping in those beds, so that was a special day for us and obviously something I’m really happy to be able to do.”