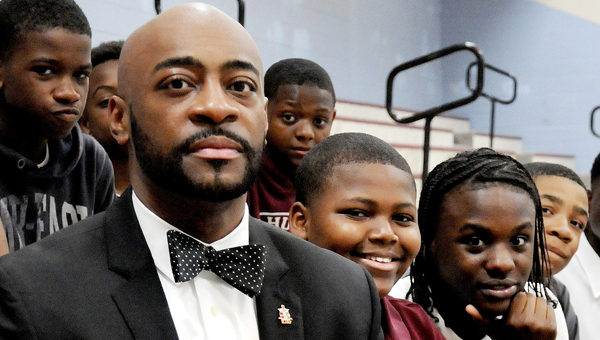 James Pope is a humble man. When asked about what he has accomplished in the last few years, he gives credit to teamwork, not himself.

“You know how some people can brag on themselves,” Pope said. “I don’t like to boast on me, but I feel very humble. But also I’m just excited to the point that someone saw something in me to nominate me for this.”

As he sits in his high-back burgundy leather chair, he is beaming. The love he has for what he does is apparent, as the corners of his eyes crinkle and his hands move feverishly while he speaks about his passions and duties as principal at R.B. Hudson Middle School.

“Being a principal, you’re daddy, you’re the nurse, you’re counselor, you’re working with the kids, you have to deal with the curriculum,” Pope said.

Pope is not only the principal for R.B. Hudson, but he acts as the Alabama Reading Initiative’s, reading coordinator for the city of Selma. While working with the Demopolis City Schools reading program in 2009, Pope received recognition by earning the Exemplary Reading Program Award.

“It was an exciting adventure to learn from other people from around the country there,” Pope said. “It was just remarkable to be able to receive such an

Still, Pope does not take all the credit for the work he has been able to accomplish as the reading coordinator and principal. While working as assistant principal at Knox Elementary, Pope and some of the staff had the opportunity to help a child who had difficulty reading. With the compiled efforts, the child was able to read and comprehend what he was reading within the year.

“I just thought about ‘not one of us knows as much as all of us,’” Pope said. “It’s so powerful to know that a team effort approach is better than just one person trying to do it by themselves.”

Pope is also a Kappa Alpha Psi fraternity alumnus. Pope continues to try to personify the qualities of a Kappa man.

“I think that’s the reason for where I am today, because of being around so many other role models that are Kappa’s,” Pope said. “Every time I’m around them, they speak volumes of achievement.”

For Pope, it seems it will always be about others.

“I love my job,” Pope said. “I love working with kids. If I didn’t have a dynamic team here, in this building, everyone working well together, I don’t think we can be as successful as we are.”

Ebony Rose When Ebony Rose played softball at Dallas County High School, she learned how to play every position on... read more