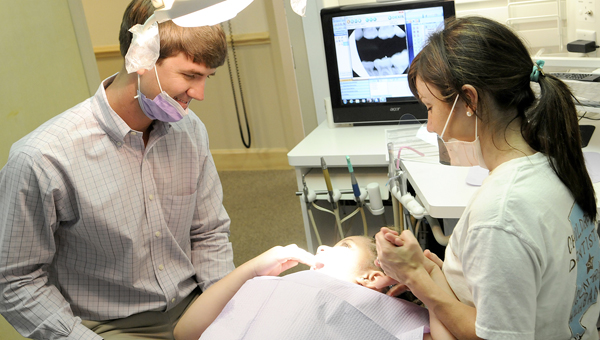 Dr. James Osborn looked into a lot of different medical fields in college before ultimately choosing dentistry as his profession of choice.

A lot of patients in Selma and Dallas County are glad he chose to go that route.

Osborn, who grew up in Moulton, Ala., earned an undergraduate degree in chemical engineering from Auburn University, but knew he wanted something more hands-on. He considered numerous medical careers and even considered being a pharmacist but eventually found dentistry was his true calling.

“I watched a couple of dentists and they had a great time and their day was pretty laid back,” Osborn said. “It wasn’t too stressful and they were really using their hands. They were really solving problems in a surgical manner but with a ton of patient interaction.”

The patient interaction is one of Osborn’s favorite things about his typical day at Children’s Dentistry of Central Alabama. He knew he wanted to choose a career where he could help children after serving as a camp counselor at Camp Smile-A-Mile, a program for youth battling cancer.

“I [volunteered there] multiple times and I felt like my heart strings were pulled for kids and felt that I was supposed to focus in on kids more and more,” Osborn said.

Throughout dentistry school, Osborn also knew he always wanted to get back to a small town, like Moulton, where he could try to make a difference in the community. After dentistry school, he had opportunities in Fairhope, Montgomery and Birmingham, among others, he but knew small-town life was the right choice for him.

“Selma was the one that I really felt led to,” Osborne said. “That divine path has been the most blessed path we could have ever had, and now we have had our second child here and we are having our third child in September here, and we are really invested in the community.”

Looking toward the future, Osborn only sees great things ahead for the community of Selma.

“We have great people here and as we all get on the same page, we want to move Selma forward,” Osborne said. “I think that is going to happen and this city is really going to be one in which the eyes hopefully all of Alabama sees [and says] ‘look at the turnaround in Selma. Isn’t it awesome?’ That’s what we want to be a part of.”

James Pope James Pope is a humble man. When asked about what he has accomplished in the last few years,... read more